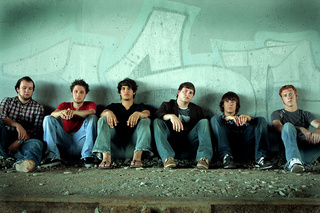 "The name Livalie comes from the idea of who people become in today's society," Wright said. "They live their lives with alter egos, being one person in public and a completely different person in their private lives."

"No one is really true to themselves anymore - politicians, music artists, the average businessman; almost everyone 'lives a lie.' People constantly sell their integrity, morals and values for anything. You won't ever see [us] posing as anyone else or changing ourselves onstage. We are who we are."
- Paul (Guitar) - The Johnsonian

Some consider the lines of rock to be blurred beyond all belief. There is no way to make a mainstream sound without becoming a sell-out, and there is no way create complex entertaining music without being underground. People feel forced to choose a side. A Side? Since when did music have a side? Why can't we create sounds of each genre and create something that does not redefine music, but catches us all? Livalie, in fact, does just that.

Combining heavy guitar riffs that reminisce of old sevendust and incubus days with beautiful piano and synth parts, Livalie is able to maintain and make a sound that is distinct, catchy, and appealing to practically everyone. With considerably pop, sometimes even R&B style vocals, frontman Drew Cyphers put's his spin on top of the bands heavy rhythmic style that seals them off from other artists in todays music industry. It creates a groove, a feel that grabs you.

Livalie Release "A Perfect Compromise" by The Johnsonian
For seven long years, local rock band Livalie (live-a-lie) has been dreaming of recording and releasing their own album. Since the composition of their first original song, the members of the band...
WU's Resident Rockers Plunge Into Local Scene by The Johnsonian
It has been said that from small beginnings come great things. Local rock sensation Livalie is proving this statement. Drew Cyphers (lead vocals), Paul Wright (guitar), Sean Cody (guitar) and...
NIGHT SOUNDS: Live a little tonight with Livalie by The Herald
Evil doers and such beware, upcoming area band Livalie challenges all to show their true colors. This six-piece band, based in Clover, is part of a three-band lineup that includes Restless Oblivion...