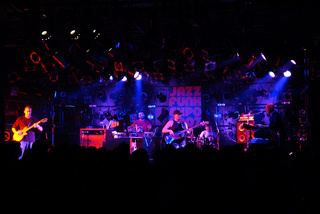 Local 518 is comprised of David Pastorius on bass, who fans voted "Best Bass Player" in East Central Florida 2 years in a row, Al Brodeur on guitar, Bjarne Jannik Kjaer on drums, Anthony Darmana on percussion and Dave Hoag on keys. Collectively, the group has brought together a musical combination of styles and techniques that exemplifies their contemporary jazz/rock fusion sound, interlaced with island rhythms and funktified grooves. Their first CD, "David Pastorius and Local 518" was released in the Territory of Japan on the P-Vine Records label in May of 2007. In December of 2007, Local 518 showcased their debut CD to the incredible fan base they acquired since the release of the CD in Japan. With performances beginning at 'Billboard Live' in Osaka, the 'Blue Note' in Nagoya, and ending at 'Club Quattro' in Tokyo, Local 518 sold out every venue to very enthusiastic crowds. The band just spent the last few months, at Studio 101 in Melbourne, Florida, completing their follow-up cd entitled "Sense of Urgency" for release on the P-Vine Records label in Japan. The band currently performs at a variety of venues along the space coast of Florida and the greater Orlando area while awaiting their second Japanese Tour.

Local 518 by T. Bennison, "The Beachside Re
Local 518 are an original, groove-heavy instrumental band comprised of David Pastorius on bass, Al Brodeur on guitar, Bjarne Kjaer on drums, Anthony Darmana on percussion, and Dave Hoag on...
p
A
n
E
F
Song Title by Artist Name