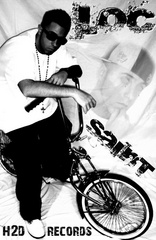 Sean Tamman a.k.a. Loc Saint, born February 1, 1985 was raised in Washington state commonly known as "The Wash." Loc has been writing, recording, and producing music since he was 12 years old. Now at the age of 24, Loc has self produced six underground albums, performed locally and gathered a huge fan base in places such as California, Colorado, Texas, Washington, and all of the world. In his years as an underground independent artist, Loc has flooded the world and the internet with his trigger tongue flow, insane lyrics, relateable real topics, and unquie melodic harmonies. His music has been described as dark, deep, mysterious and utterly insane. Loc's lyrics are truly genuine as he raps about real experiences and relateable feelings and situations that we all deal with in life. Whereas most artists enlist the help of companies to succeed in the music industry, Loc Saint has been self taught in literally every craft used in the industry such as producing his own beats, making his own graphics, mixing and mastering his own material, promoting himself like a mad man, and submitting demo's every week. In conclusion, Loc Saint has been a one man show in his 12 years as an independent artist. Now with the knowledge, talent, and know how, Loc Saint is ready to be an artist under a record label.

"REAL" The'Mixtape Out Now by
LOC'S NEW MIXTAPE OUT NOW AND FOR SALE ON THE MYSPACE SITE !! 1.20 Tracks 2.Running time of over 90 minutes long 3.Reviewed as one of the hottest albums out now 4.Variety of trax for all occasions...
p
A
n
E
F
Song Title by Artist Name