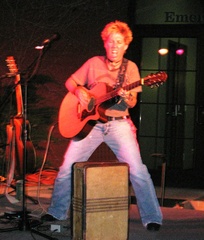 One Girl. One Guitar. One Helluva Good time. Lojo Russo is described as a songwriter with "a lot of lyrical power", a guitarist with "powerful playing" and a singer with "one hell of a voice". With raw energy she moves from sweet folk to roots rock without missing a beat. On stage she combines her sense of music with a sense of humor - sometimes outrageous, sometimes intense, always original. Her musical roots began in Minneapolis but her roots music follows the mighty Misissippi where she now makes her home in Iowa.

2008 New Folk Finalist by
2008 Finalist in the Kerrville Folk Festival New Folk Songwriting competition.One of the oldest and most respected festivals and talent contests in the country. only 800 can (and do) apply and 32...
Lush patterns by St. Paul Pioneer Press
“Russo blends alternative, jazz, folk and Celtic styles into a lush pattern of sound.”
"As we entered the cafe... by Minneapolis World Beat
As we entered the cafe, a voice with the energy and rocking empowerment of Ani and the graceful folksiness of the Indigo Girls came from the stage.
Helluva voice by Pulse of The Twin Cities
“A hell of a voice…[and] a lot of lyrical power.”
Girrrl Music by Nighlife Magazine
Perhaps it's cliche to compare a warm, raspy female voice to Melissa Etheridge but Lojo Russo's "The Secret", a funky, bluesy, wah-wah fueled number overtly recalls early Etheridge as well as more...
Best Female Performer by MN Women's Press
Nominated "Best New Folk Artist" by MN Music Awards
p
A
n
E
F
Song Title by Artist Name