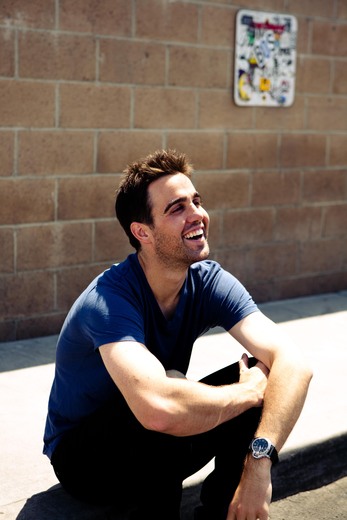 National recording artist Kelley James’music is a fascinating collection of acoustic guitars, hip-hop beats, thoughtful lyrics and freestyle flows. His recently released single “Summertime On My Mind” has become a summer anthem and has received recognition from several viral entertainment sites including BroBible, BuzzFeed, ClevverMusic, Mashable and Tone It Up.

James has shared the stage with Mike Posner, Kate Voegele T-Pain, Slightly Stoopid, Joshua Radin, Goo Goo Dolls, Sara Bareilles, Tyrone Wells and LMFAO. James recently played a weeklong residency at The Cosmopolitan of Las Vegas in June and just finished headlining the Common Threads Tour for Patagonia in Australia, which makes his fifth tour of Australia to date. Additionally, he has toured the nation with acts such as Mike Posner and O.A.R., and has performed over 700 shows in the past four years. He has sold out shows at the Troubadour in Los Angeles and the House Of Blues in Chicago and is a regular performer at PGA events including the Coors Light Birds Nest at the Waste Management Phoenix Open, Farmer’s Insurance Rock Ball, HP Byron Nelson Pavilion After Dark and more.

Stereotude Artist of the Week by MATT DEKNEEF
Mix together a laidback mix of acoustic guitars, hip-hop beats, and sentimental lyrics, and you have a blended margarita of a musician that is singer-songwriter Kelley James.
Kelley James raps about the Giants and 49ers by Comcast SportsNet
Artist Kelley James stopped by Chronicle Live and did some free-styling rapping about the Giants and 49ers.
What’s Good in the Music Scene? #28 – Kelley James by Creative Solutions Music Promotions
KJ, thanks taking some time to speak with us about your career as a musican. Q1: When did you first start playing music? Started playing guitar at 12. First band at 15. First solo album at 19....
p
A
n
E
F
Song Title by Artist Name