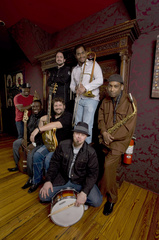 Digging deep and giving it all in everything they do Chicago’s Lubriphonic specialize in a unique offering of funky rock n’ roll. The septet’s tight and raw sound is immediately familiar, fusing the roots of soul with explosive in-your-face delivery and sensuous R&B dance music. The Lubriphonic sound is full of precision orchestrations made up of blazing guitars, blazing three piece horn lines, soulful songwriting, bluesy vocals and the habit to cut the funk loose. The best description of the band’s sound comes from Relix Magazine: “Superb, adventurous, diverse, simply mesmerizing instrumental work. Steeped in soul, rock, pop, and blues Lubriphonic's members play with a tenacity and precision that sets them apart from equally proficient bands.” Lubriphonic is the brainchild of guitarist Giles Corey and drummer Rick King which began as a residency at Chicago’s legendary Checkerboard Lounge, where they recruited some of the best blues, funk, and rock musicians in the city for improvisational live sessions in which the kinetic energy that make a band were initiated. The evolution from performing as sidemen for the city’s most legendary blues stars such as Buddy Guy, Otis Rush and Koko Taylor into an original group came from the hunger of each musician to develop an intense and simmering sound. Guitarist Corey explains “Everyone in Lubriphonic comes from the Chicago blues or gospel music pools. I met Rick King while playing in blues bands in Chicago, and when we eventually wanted to start a band together all of the cats we knew played the blues. There were and still are all these cats that had a strong foundation in Chicago roots music who understood the feel and the nuances, but were dying to stretch out. Lubriphonic turned out to be a good vehicle for that.” It’s this expression of creativity and energy at each performance that is paramount to Lubriphonic. “We are a live band first and foremost. There's a palpable energy emitted by any large gathering of people,” Giles continues. “When you perform for an audience and give them positive energy, they take what you give them, amplify it and then throw it back to you. It's a fantastic feeling.” Lubriphonic – made up of Giles Corey (vocals, guitar), Richard King (drums), Pennal Johnson (bass), Garrick Patten (saxophone), Norman Palm (trombone) and Andrew Toombs (keyboards) – tour extensively, crisscrossing the country playing festivals, theaters and clubs spending over 220 days a year on the road. Sold out shows, national tours and their evolving sound are proof enough of how relevant Lubriphonic is going to become in the coming years. The group’s recent studio debut, Soul Solution manages to contain the trademark explosive live energy an accurate studio portrayal. Since first forming in 2002 Lubriphonic already boasts a nationwide fan base, playing to crowds opening for such acts as Buddy Guy, George Clinton & P-Funk, The Derek Trucks Band, The New Mastersounds, Jon Popper Project, Karl Denson, and Buckwheat Zydeco. Entirely committed to continuing their mission, Lubriphonic is happy to be playing the music they love and winning over new fans each new night at each new city. “As a sideman one of the things you learned is how to be professional. I learned how to give to an audience, no matter what. That's what you’ll get at a Lubriphonic show.”

Rites of Spring 2010 by –Landin E. King, Contributing Editor
The flowers are budding, the sun is starting to shine and the Rites of Spring Festival has returned again to Vanderbilt University in Nashville Tennessee!attb31cdThis weekend however, the sun...
Lubriphonic Tour Announced on Jambase by
LUBRIPHONIC NAIL DOWN OPENING SLOT FOR TOUR WITH THE NEW MASTERSOUNDSCO-BILL PAIRS GREAT BRITISH FUNK PATRIOTS WITH CHICAGO'S FUNKIEST IN 'MONSTERS OF FUNK'LUBRIPHONIC OFFERS FREE SHOW DOWNLOADS...
p
A
n
E
F
Song Title by Artist Name