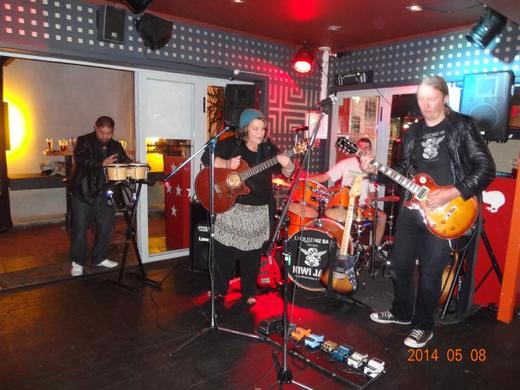 Madeleine Lane is a singer-songwriter, poet from New Zealand/Aotearoa in the South Pacific. She is also an independent music producer,

Madeleine composes and performs her songs based on her poems so has a variety of genres. She records live and has an unusual  picking style getting a bass going actively while  the melody and sometimes a harmony line are  playing at the same time often up on the high frets .

Madeleine Lane has an unusually deep voice and sings bass or tenor if she is ever in a harmony singing group.


Global warning, Hip Hop Blues  and New world on the margin are three of eight songs on her debut album To Aotearoa With Love (2003) which sold out via her live performances around Wellington the capital of New Zealand..

Madeleine is currently producing a new album to sell via the internet.In October 2013 her song New world on the margin  got into the Top 10 on the Acoustic channel competition, and in December 2013  Madeleine's song  Mean man got into the top 10 in the Blues channel competition. This month January 2014 she has entered some more of her songs (two of which are mentioned below).

All lyrics and music on Madeleine Lane's profile are copyright to Jane Matheson (Madeleine Lane is Jane's performance name) . All songs here are registered with the Australasian Performing Rights Association (APRA). A  flamenco overlay harmony composed by Mika Aloia a well known New Zealand  flamenco guitarist can also  be heard in the song Global Warning, and a bass tune composed by Vicki Reynish a singer- songwriter drummer guitarist from Taranaki New Zealand can be heard in the song  Words Between Friends.

Madeleine Lane can be contacted on email  madeleinelane.3@gmail.com or on Facebook