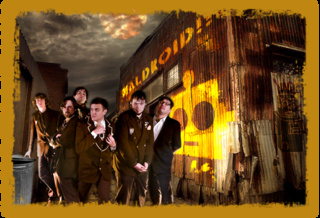 Only a handful of bands can claim Good Morning America as the first place they shared a stage. Even fewer count rock royalty David Allen of Gang of Four, The Strokes Fabrizio Moretti and Corey Feldman as fans. Yet Maldroid picks up the gauntlet of 21st century rock nouveau where others dare not tread. Pulling from inspirations as diverse as Andy Warhol’s Factory, Oingo Boingo, Rocket From the Crypt, and seminal game show classic Joker’s Wild, these veterans of the East Bay scene present their debut, "Maldroid", available on Fuzz Artists and select record stores on April 15th. Maldroid’s strategy for success is a combination of old-school Do-It-Yourself work ethos, mixed with the concept of the band being a moving, living, ever-evolving art project- more of a commentary on society than a consumer product. “We make every thing ourselves- our suits, our t-shirts, our logos, our stage props,” says front man and video director Ryan Divine. Such a hands-on approach to crafting image contrasts the band’s spacey fascination with robots and machination. This pastiche of Buck Rogers in the 25th Century with sentimental childhood favorites is a repeated theme throughout Maldroid’s music as well as their techno color videos. Divine’s inspired take of Maldroid's “He Said, She Said” video is an homage to A-Ha's “Take On Me,” as well as an illustration of the band’s ability to do everything “in-house” (Divine did his own take on the classic 1980’s hand-drawn style). “He Said, She Said” plays have blown past the 1 million mark, as has the new single and video from Lads, “Heck No! (I’ll Never Listen To Techno), in which Divine painstakingly uses Lite-Brites to illustrate the curse of a world run by robots. The Future is now. The Future is Maldroid.

Oakland's Maldroid are You Tube famous by The Owl Mag
This is the first full fledged interview with Maldroid EVER. Robbie and the Owl mag team were hip to Maldroid before anyone else. See link for entire story.
Where It's At by Oakland Magazine
Cocky, rockin’ and brash as they come, Oakland’s Maldroid could be the poster child for a new music-industry paradigm...See link for more of this story.
Oakland band shows how to make it in YouTube age by San Francisco Chronicle
This was published on the second page (inside cover) of the Chronicle's weekend edition after our second show at the Rickshaw Stop in San Francisco. See link for the whole article.
Video Made The Radio Star by East Bay Express
This was the cover story on the East Bay Express for the week of February 14th 2007. Nate Seltenrich gives us an unbiased look at the band in the most in depth article on Maldroid to date. See link...