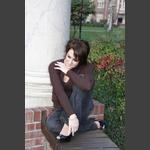 Maria Johnston is poised to become one of the most impressive artists to arise during the 21st century; but a diversely talented individual in her own right. She's praised for her elastic ability to move easily from Jazz to Ambient genres of music while often composing her own material. She's complimented for her ability to place herself into the lyrics she sings and respected for being one of the easiest artists with whom to work.

Maria has performed as a studio vocalist for several well-known artists including Digital Underground's Chopmaster J, Tupac and Mephisto Odyssey. The title track entitled “The Lift” off “The Lift EP” by Mephisto Odyssey hit #42 on the Billboard Dance Charts and continued to dominate the charts for several weeks charting higher than such artists as Gloria Estefan, Shannon and Tracie Spencer. Her sexy, soulful voice has earned her the title of “DIVA Vocalist” on the dance music scene. A true testament to this title, her material has been featured at the winter music conference and has been all the rage on the San Francisco dance scene.

Maria is no stranger to live performances. In 2003 she was the headliner for the “One World Beat” music festival, an event put on once a year by musicians all over the world to raise money for their favorite charities.

Touring under the band name “Jaheira” , Maria played to sold out shows at the Hard Rock Café in San Francisco and B.B. Kings Blues club in L.A, raising money for the Ronald McDonald house as well as local schools. Recently, she's been wowing audiences in California with original material and some old school classics.

Now sit back, close your eyes and prepare to be taken on a sensual trip though your deepest musical desires with her latest album titled “ What A Woman Wants ” . This smooth, jazz flavored soon to be classic album will not be forgotten.