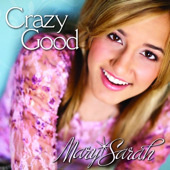 Mary Sarah is a 15 year old singer/songwriter/entertainer residing in Houston, Texas. Mary Sarah’s career began a few short years ago as a KidzBop Kid. She toured on a 40-city, KidzBop World Tour where she was a featured soloist and ensemble performer. She began her singing at the age of eight, performing at various regional events and church venues. Not long after her first taste of “show business,” she began vocal training. Mary Sarah’s credits include live performances on the KidzBop World Tour, Fort Bend Theatre, Houston’s Best New Talent, local and regional Opry’s, City-wide fundraising events and independent film and video projects. She is an energetic young lady with a passion for life, family and performing—regardless of the audience. She actively supports Juvenile Diabetes Research Foundation.

The Great Unknowns by Episode 85 is an in-depth audio interview and musi
Her debut album is full of pop style country songs brimming with a sound that is comparable to Taylor Swift and Lila McCann. While she possesses her own unique vocal characteristics, it's plain to...
p
A
n
E
F
Song Title by Artist Name