The Adobe Flash Player is required to watch videos on this page
Print M.Could's EPK 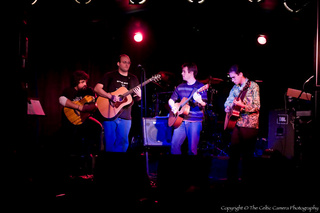 Might Could entertains listeners by creating and performing songs with rhythmically interesting, tight, and neatly interlocking parts. They are instrumental, with a group dynamic that provides a fresh alternative to solo instrumentalists. People have observed that their songs seem to draw from influences ranging from classical, to heavy metal; from progressive rock to jazz... and even some old-fashioned videogame music. They have been compared to King Crimson, the California Guitar Trio, Steve Morse, Michael Hedges, Metallica, and Vivaldi, to name some. The lineup consists of Andy Tillotson, Tim McCaskey, and Aaron Geller on guitar, with Luis "Gordo" Nasser on bass detail. Andy and Aaron are the main composers.

In 2000, Andy and Tim started in a physics Ph. D. program at the University of Maryland. In an effort to retain his sanity, Andy started recording some acoustic demos with hometown friend, Scott Phillips (writing collaborator on early MC material). Unfortunately, Scott did not actually live in Maryland-- but Andy was still eager to continue to write and play music. He convinced Tim (who was also worn out from doing nothing but physics) to join him in some early open mic performances. Around the same time, they met Gordo, who would study and work at Maryland for the first few Might Could years as well.

Around 2003, Tim and Andy met Aaron at an open mic. They discovered he was a perfect fit for a set of Nintendo covers, and was also on his way to earning a bachelors degree in chemistry. In short, it was kismet. Not long after, he became a full member of the band. With a third guitar, the band became at least 50% more interesting.

Once the lineup was set, Gordo agreed to take time from his busy schedule (by day, a physics professor, by night, bassist of two progressive rock groups) and lend some bass assistance to the tunes.

August 2005 saw the release of All Intertwined, the first full-length and full-band Might Could album. Two years later, their second release, Wood Knot, was unleashed on the public. Both albums have been well reviewed by progressive, art-rock, and guitar-based web sites, and have been played on various radio stations, most notably, NPR.

P.A. and one mic (mic not necessary)

Bob Mulvey on "Wood Knot" by Dutch Progressive Rock Page
I'm finding it nigh on impossible to offer a helpful, all encompassing sentence or paragraph to capture the essence of Might Could's music. To me it is a veritable potpourri of ideas that together...
Joseph Singler on "Wood Knot" by Prognaut
“Wood Knot” is a perfect marriage of intricate guitar interplay and well conceived melodic compositions with a distinctive hook – plus an ambitious tapestry of jazz fusion, new world, progressive,...
Marcelo Silveyra on "All Intertwined" by Progressive World
Not only does Might Could have plenty of both guts and rock verve, but it also has the ability to deliver some of the best interlocking instrumentals this side of Discipline-era King Crimson with...
Murat Batmaz on "All Intertwined" by Sea of Tranquility
Might Could is an instrumental guitar group that combines the forces of three acoustic guitars and subtle bass work and writes songs characterized by high degrees of instrumental ability and...
Ron Fuchs on "All Intertwined" by Prognaut
[Be] sure to check All Intertwined out ASAP! Its appeal is great for fans of acoustic guitar music as well as the softer side of instrumental based progressive rock. This is another surprise...