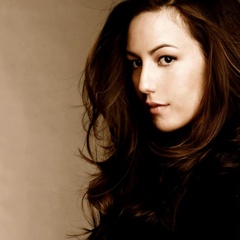 This sultry songstress has a timeless sound that will captivate your interest from the moment you take a listen. Make Me Happy, Make Me Blue is the debut album of singer/songwriter Meghan Beaudry. Meghan had her first tastes of songwriting in the casual environment of her home. Growing up she and her family would play and write songs together as a pastime. At the age of 14, Meghan began seriously writing her own songs about her life experiences and what she observed in those around her. In fact, the second track on the album, “All Alone,” was one of the first songs she wrote. Her ambition to record was delayed but not deterred as she worked through other goals and personal hurdles. Then at the age of 19 as she was getting ready to graduate from college, she sought out a studio where she could record a demo in hopes of pursuing a music career. This is when she found Signature Sounds Studio and met recording engineer Mark Thayer who has worked with Louise Taylor, to Billy Taylor, to James Taylor. After meeting Mark, he convinced her to record a whole album with her original music instead. This is when he introduced her to accomplished musician and singer/songwriter Steven Santoro who became her producer. A few months later, after Meghan had graduated from college, they began collaborating and working on what would become her first album, Make Me Happy, Make Me Blue. Meghan has a broad display of vocal color that is both vibrant and angelic. Her remarkable voice and soulful phrasing paints an image that will carry you through the story. The lyrics draw on both the solitude and playfulness of life, bringing your mind and your heart along for the ride. She fearlessly mixes genre’s to create a sound uniquely her own. Melting styles like Jazz and Reggae together as if they always belonged. Meghan’s debut album captures her wide range of ability and welcomes the listener to a refreshing escape. Kevin O’Hare, a Nationally-syndicated music reviewer, Advance Publications, has described Meghan’s music as, “Very impressive…a cross between Rickie Lee Jones and Laura Nyro…Really fine upper range and nice diversity to the material on the CD…and the jazzy feel of “So in Love” reminded me of a great ’60s song, “Soulful Strut.” She definitely has a lot of talent, I’m sure we’ll be hearing plenty about her in the years ahead.”

LiveWire Awards 2012: Best music in the Valley by Donnie Moorhouse, The Republican
“Meghan Beaudry “Make Me Happy, Make Me Blue” – Beginning with her cover of Carole King’s “You’ve Got A Friend,” through to the last note of this 11-song offering, Beaudry captivates with her...
Kevin O’Hare reviews Meghan Beaudry’s CD by Kevin O'Hare
Kevin O'Hare has described Meghan’s music as, “Very impressive…a cross between Rickie Lee Jones and Laura Nyro…Really fine upper range and nice diversity to the material on the CD…and the jazzy...
Review by Andy Volk by (The Fretboard Journal; Acoustic Guitar Magazine)
“Meghan Beaudry is an up and coming singer to watch. Pop singers who can sustain notes and stay in tune without help from production tricks (like AutoTune software) are becoming something of a rare...
p
A
n
E
F
Song Title by Artist Name