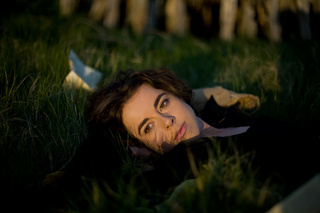 IN BRIEF
Lyric-based, contemporary acoustic songwriter. Influences include poet Mary Oliver, songwriter Shawn Colvin, and mood maker David Gray. Originally from rural western-most Massachusetts, Hutchinson now lives in the Boston area. Although only 29, she has already won numerous songwriting awards in the US, Ireland and UK, including recognition from prestigious competitions at Merlefest, NewSong, Kerrville, Falcon Ridge and Rocky Mountain Folks Fests. She recently signed with Red House Records for the March 4th release of her new album "Come Up Full."

ABOUT NEW ALBUM "COME UP FULL"
Hutchinson’s new CD of original songs confirms that she is one of the great voices of the next generation of acoustic musicians. Come Up Full is a lyrically rich record about encountering good things when you least expect them. Amidst war, loss and heartbreak, Hutchinson’s songs hold the promise of love, hope and homecomings. In songs like “Ready,” “Home” and “Come Up Full” she sings about our universal ability to overcome life’s most trying times. With a poet’s sensibility, Hutchinson’s songs are laced with a weathered but unselfconscious optimism, a love of language and of the natural world.

An honest writer, Hutchinson does not shy away from the hard topics. In “America (Enough),” she explores American culture, excess and war by writing about how things taken to an extreme almost become their opposite. Another timely song on the new album is her “Song for Jeffrey Lucey,” based on the real story of Lance Corporal Jeffrey Lucey, who returned from Iraq, suffering from severe Post-Traumatic Stress Disorder (PTSD). “I heard about Jeffrey Lucey and was devastated by his story but incredibly moved by how his family spoke out about PTSD,” Hutchinson says. “I think we all need to recognize sorrow, both the grief of a country at war and our own very private sorrows, in order to get through them.” Whether tackling political issues or matters of the heart, Hutchinson does exactly that—recognizes the pain that gives our lives a greater depth and a deeper appreciation of joy. She writes about human resilience and maintains that no matter what happens in our lives, our nets can still come up full.

Garnering a loyal following during the last few years, Meg Hutchinson has won fans through her lyric-driven folk/pop songs and riveting live performances. In support of her new album, she will be touring solo and with a slew of greats, including Catie Curtis, John Gorka and Susan Werner. For her full tour schedule, please visit her website at www.meghutchinson.com.

BIO
Meg Hutchinson was raised in the small town of Great Barrington, Massachusetts by English teachers, so it is no surprise that she is a writer with an uncanny perceptiveness about the natural world and the human condition. Growing up in the Berkshire Mountains, the woods and ponds were her childhood muses, as were the songwriters she listened to, like Greg Brown and Joni Mitchell. When she inherited her grandmother’s 1957 Martin guitar at age eleven, her love of words found an inspiring instrument, and there was no turning back. “Songwriting is not something I chose, I’ve just somehow always known that this is what I love to do. This is what I can’t help but do,” she says. Although only 29 years old, Hutchinson has garnered much critical attention for her unique alto vocals and resonating, razor-sharp lyrics, and her sophisticated folk/pop songwriting has endeared her to such acclaimed songwriters as Susan Werner, John Gorka and Catie Curtis, folk greats with whom she will be touring in support of her new album on Red House Records Come Up Full.

After graduating from college with a degree in creative writing, Hutchinson quit her longtime job on an organic vegetable farm and settled in Boston. In between gigs at pubs, coffeehouses and train stations, she won a Kerrville New Folk Award (2000) and was nominated for a Boston Music Award for her first studio album Against the Grey. She went on to win awards at the Rocky Mountain Folks Fest, the Telluride Troubadour Songwriter’s Showcase in Colorado and The Chris Austin Songwriting Contest at Merlefest in North Carolina, all in the course of a year, causing national publications like Performing Songwriter to take notice, calling her “A master of introspective ballads filled with understated yearning and an exquisite sense of metaphor.”

After recording her live CD Any Given Day in 2001, and continuing to build a fan base throughout the Northeast, she went into the studio with esteemed producer Crit Harmon (Lori McKenna, Martin Sexton, Mary Gauthier) to record The Crossing. Released in 2004, this album was enthusiastically received by critics and DJ’s across the country, catching the attention of renowned folk/roots label Red House Records. Label president and veteran producer Eric Peltoniemi knew there was something special in the young singer-songwriter, “Meg won me over with the profound yet easy depth of her lyrics—rich words married to melodies I just can’t get out of my head.” Knowing her songs could stand alongside those by Red House heavyweights Eliza Gilkyson and John Gorka, Peltoniemi signed Hutchinson to the label. Teaming up again with Crit Harmon, Hutchinson recorded her Red House debut Come Up Full over the course of more than a year in Boston.

Combining her raw storytelling folk style with tasteful, intimate production, the album showcases her sweet, earthy vocals that have been the hallmark of her music. Spanish-style guitar fills and light organ parts create a radio-friendly record that is wistful and warm. Come Up Full is a glimpse of the mature arrival of a brilliant songwriter whom listeners will one day boast they listened to way back when and confirms that Meg Hutchinson is indeed one of the great voices of the next generation of acoustic musicians.