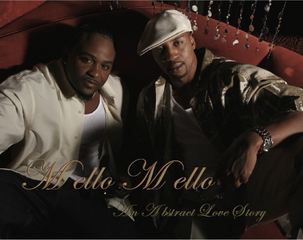 It’s not your imagination that things are definitely getting cooler these days in red-hot Phoenix. That exciting new neo-soul vibe you hear chilling out the desert is coming straight from the hearts of Vocalist Rich Reddy and Emcee Xtravagentways, whose love for everyone from Marvin Gaye to Outkast inspired their irresistible easy grooving duo Mello Mello.

Creating a unique sound they say you can be “grown and sexy to, or young, hip and still maturing” to enjoy, the duo on their debut album tells An Abstract Love Story destined to touch hearts and minds everywhere. They were each experiencing their own up and down issues with romantic relationships while they were writing and recording the album; this leads to some deep, refreshing honesty that everyone can relate to as they sing and rap along with the fresh beats and melodies. Fifteen of the sixteen tracks on An Abstract Love Story (which features 13 songs and three interludes) were produced by Raycean, one of the city’s hottest R&B/Hip-Hop producers whose sound blends the shape of J-Dilla and the energy of The RZA.

Before Xtravagentways met Reddy, when the two were working in telemarketing for MCI in 2003, he was performing and recording with the popular five man local hip-hop group Phat Richard. A “military brat” born in Georgia, he moved to Arizona as a teenager and got his first turntable and mic while growing up in Sierra Vista. Xtravagentways was a big fan of D’Angelo, Erykah Badu and Musiq Soulchild and was looking to move in a more mellow direction, away from “the sky is falling” vibe of his band.

Reddy, a Long Beach, California native who grew up singing in church and moved to Phoenix in his teens, had been singing in a group called Blaq Kaddy when he and Xtravagant hooked up. The singer and his musical partner Bobkatt did some early recordings using Xtravagentways' Yamaha RS7000 drum machine; while nothing came of those sessions commercially, it was clear from the start that Reddy and Xtravagentways had an exciting musical chemistry and a mutual love for neo-soul that would grow into something bigger and more Mello Mello than they could have imagined.

“An Abstract Love Story completely reflects who we are simply by blending Xtravagant’s hip-hop with my R&B background,” says Reddy, who does all the vocal melodies and harmonies while his partner does the rapping. “We’re both very smooth, laid back individuals, grownups who have been through a lot relationship wise and have strong stories to tell.”

Xtravagentways adds, “What’s most comfortable and natural for us is describing how we feel towards a woman. With me, it’s about communicating in a different way and expressing myself without getting too mushy. We like to get inside a person’s mind and get them to see where we’re coming from. The way I deliver my rap parts is designed to make people think. On the surface, it seems easy to follow, but then it goes deeper. The cool thing about Mello Mello is that both musically and lyrically, we’re not limiting ourselves to one audience. Grown folks and kids alike can find joy in the conversation we’re having with them.”

Though Mello Mello is releasing An Abstract Love Story as a whole project—and to really go deep into the experience of their musical narrative, it must be listened to in its entirety—an obvious first single would be “I Just Wanna Love U,” which has a sexy, subliminal groove under the duo’s desire to do whatever it takes to make a woman know how they feel. They’re likewise direct and romantic on “Dedicate the Night,” the slow grooving ballad that came together the fastest of any on the collection. “Movin’ On,” which reminds the duo of “the evening sunset on a nice summer day, when you’re ready to go out and hit the clubs,” takes a different approach, with Xtravagantways doing more straight spoken word than rap. The dreamy “Angel,” “Come Home” and “Foxy L’il Thang” are pure spotlights for Reddy’s extraordinary vocal talents. The two-minute interlude “Bah-Dah-Dah” explores more exotic and improvisational territory with its jazzy feel with a touch of Miami meringue/salsa.

An Abstract Love Story - Mar 23, 2008 by Linda Koennecke - SoulSite.de
NeoSoul is far from dead, the show singers and rappers Rich Reddy Xtravagentways. The duo "Mello Mello" they now have their first joint panel. "An Abstract Love Story" is the album that most...
Down to Earth, Love, Sexy Drama - Nov 20, 2007 by Mark Kirby - MUSIC DISH
Neo Soul is the antidote to the pervasiveness of whack R&B; so-called music that replaced the feelings, experiences, hopes and dreams of the average man or woman with contrived images and...
An Abstract Love Story - December 13, 2007 by L. Anne Carrington - Indie Mus
When we think of soul music, many of us tend to think of the days back during the Motown heyday as well as the rest of the '60s through the '70s. Nothing spoke louder and heart-hitting sentiments...
An Abstract Love Story - Jan 24, 2008 by Christian Vlad - Nu-Soultrain
There had already arrived the items on a duo of Phoenix, which was proposing an original sound called Mello-soul! Curious we moved our knowledge, and within a few days, here here, the new cd "Mello...
An Abstract Love Story - Mar 12, 2008 by yokochoo.net
JAJI smooth tenor vocalist of the wrapper and create world Chill Out. Hey, it's not look combination with the recent royal road duo's debut attention. Vocalist and rapper duo. Like once I saw the...
An Abstract Love Story - Oct 4, 2007 by online - Neufutur magazine
Mello Mello have a pretty good description of their general sound in their act’s name. What results from tracks like their eponymous opening track is something that resembles Jodeci, Tony Toni...