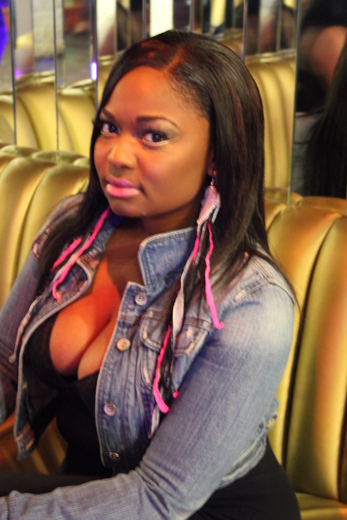 Meet NBC’s The Voice “Artist on the Rise,” & RocDaMicLA/Warner Bros. Records showcase winner & tour headliner, Mica Parris. Michaelle, Mica Parris, was born to a Haitian mother and African-American, Native-American father. She was born in Santa Rosa, California, February 20, and raised in Portland, Oregon.
Mica Parris' singing ability was first discovered at the tender age of 3. Since then, she has always been performing in church school choir concerts and musicals throughout elementary school and all the way through college. Her mother enrolled her in piano and vocal lessons at the age of 13 to further cultivate her unique vocal talent.
Mica Parris has had the privilege of performing back-up on the same stage as Brian McKnight, SWV, Boyz II Men, Bell Biv Devoe, Michel'le, Jon B, & Al B Sure, in the Ladies Night Out Concert series.
She has added the finishing touches to many songs for producers and song writers that were in search of the perfect, versatile vocalist. She has been flown across country to perform live for a healthcare organization for its centennial anniversary, for which a jingle she recorded. She has worked with several talented producers, including, a 4-time, Dove-Award winning producer to remake Rihanna’s Disturbia. This remake was distributed to Bally’s Total Fitness as workout track, and was on the top 40’s for its genre on iTunes.
A few musical inspirations for Mica Parris are Tiffany Evans, Beyonce, Destiny’s Child, Rihanna, Keri Hilson, and India Arie. Mica Parris has performed live at various locations for various occasions including concerts, weddings, singing competitions, night clubs, and as a member of an a capella sextet vocal group.
Mica Parris has a captivating stage presence, a unique vocal tone and ability. Her vocals are very distinct. Once you hear her, and experience her live, you can never get enough!

“Music has been a friend to me for so many years. It inspires me, motivates me, and comforts me. There is always a song to compliment any sort of need I might have. Whether that is to dance, cry, laugh, or smile. I want to be able to bring those very same feelings to others through my own music.” -Mica Parris

Mica Parris Receives Phone Call from Monica by OurStage.com
Earlier this week, we announced that Mica Parris—winner of the “Artists on the Rise” Competition, presented by NBC’s The Voice—scored a one-on-one mentoring session with R&B legend Monica. What...
Mica Parris Wins Mentoring Session with Monica by OurStage.com
Mica Parris is something special. This rising Portland songstress has a sound rooted in old school soul, with touches of modern R&B and the drive of Top 40 pop-rock. Did we mention she’s got a...
What EMS is listening to ...Mica Parris "Wings" by The Mad Bloggers
I spend time on ReverbNation every now and then and most of the time it's a miss instead of a hit. This time I came across an artist I'd like to hear more from. Mica Parris. I'm impressed with...