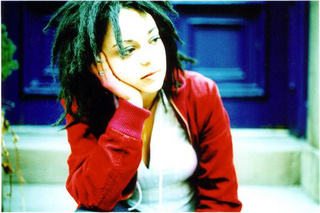 At just 5'1, it's hard to believe that such a powerful voice could come out of Michelle Citrin. Perhaps you recognize Michelle as the star of the hit YouTube sensations, "20 Things to do with Matzah or Rosh Hashanah Girl, which to date, have received millions of hits, ranking in the top 20 most viewed music videos in 2008, and have been featured on Good Morning America, Yahoo.com, CBS Evening News as well as The New York Times. Or perhaps you were dancing in a packed club, to Michelle's sultry vocals on the chart topping dance hit, "Turn it On" released on Vandit records, which led to Michelle being one of the most sought after vocalists in the genre. The press has called Michelle's intelligent pop songs, rreflective of all of our lives. Her honest lyrics, catchy melodies mixed with lush arrangements are best represented in her upcoming album, Left Brained Right Hearted - a collection of songs written, composed and arranged by Michelle that explore the eternal struggle of heart versus head, through insightful songwriting, surprising harmonies and unique orchestrations featuring an eclectic array of instruments like strings, glockenspiel, and cavaqunho (Brazilian guitar) played by A-list musicians like Producer & Multi instrumentalist,Tim Bright (Lisa Loeb, Lazlo Bane) drummer Doug Yowell (Duncan Sheik, Suzanne Vega), bassist Joe Quigley,(Lisa Loeb), keyboardist John Deley (Dido). Fully independent from any record label, Michelle has sold thousands of copies of her records. Her engaging live performances and talent for writing catchy and meaningful songs have garnered rave reviews and numerous accolades; including being named one of Billboard Music's "Top Songwritersâ€, VH-1's Song of the Year finalist, Great American Songwriting Honor, and finalist in Sony Music's Future Rock Competition. Extensive international touring has resulted in a rapidly growing, devoted grassroots fan base. She has shared the stage with Grammy Award winning artists Michelle Branch and Dave Koz, Gold selling artist Matisyahu, and Tracy Bonham. Currently Michelle is scoring the music and lyrics for Broadway's, "Sleepless in Seattle". Michelle has performed her songs on Austin Music Television Network and PBS and her original compositions are featured on the soundtracks of films and TV. From trance to folk pop, Michelle Citrin emerges as a versatile singer/songwriter. Whether playing in front of a sold out crowd of thousands on the beach of Tel Aviv, or an intimate set at a coffeehouse in Melbourne, Australia, Michelle Citrin's soulful voice, skillful guitar playing, humorous in between song banter and unpretentious demeanor has captured the eyes and ears of her audience all over the world. Arlene McKanic of the Greenwich Village Gazette says, "the audience is left with the feeling that they're in the presence of someone who's doing exactly what she's meant to do." Michelle Citrin is living proof that size... really doesn't matter!

Road to Broadway Paved by Matzah by New York Times ArtsBeat
Road to Broadway Is Paved With ‘Matzah’By PATRICK HEALYAspiring musical composers and lyricists, take note: Using YouTube to show your performance chops and creativity could lead to gigs on...
p
A
n
E
F
Song Title by Artist Name