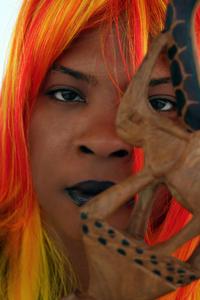 A true artist from Phoenix, Arizona, Michelle Worthen has a sound that the world will soon be blessed with. With passionate lyrics, captivating hooks and stylish melodies, she sings from the heart. When she sings, her versatile style shines. ********* Just as many of our great female vocalists, Michelle Worthen started singing and writing songs at a very early age. She works creatively and diligently and the genius impromptu writing is evident in her songs. She recorded her first single, "Just One Time" as an artist on an independent label in Phoenix, AZ. "Just One Time" earned her several honorable mentions, but she received 3rd place in the R&B Category of the Nationally recognized, "Billboard Song Writing Contest". In 2003 she received additional credit for her contribution as music/composer of the song "Come to Me" and a cameo appearance as a nightclub singer for the movie "Deceitfully Funny" directed by Tiffany Dang of Artemis Entertainment LLC. In 2007, Michelle Worthen team up again with Tiffany Dang to shoot her debut video "Rise of the Phoenix”. Her adoration for Gospel, R&B, Jazz and Hip Hop reflects in her music. “I love music and I believe music is a form of living,” says a passionate Michelle. ******** “Now I rise and the wait has been 'Worth IT'!"******** Her debut album "Michelle Worthen Rise of the Phoenix" will be released in 2008.