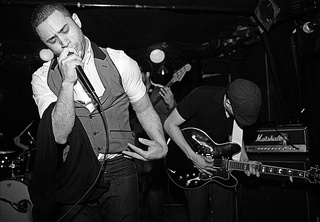 Back in 2004 when guitarist Chris Carambot and vocalist Kelvin Uffré became disenchanted with current projects, they banded together to form Millsted. Originating out of the Bronx underground hardcore/metal scene, they quickly distanced themselves as new noise. They recorded their first self-titled EP, Millsted, and took to the road establishing brutal hardcore with spacey bombast.

While going through multiple line-up changes Millsted went into the studio to record their second EP, Brief Case, all the while maturing to lush guitar structures and crooning vocal melodies. Standout tracks The Culprit, 10:43 and Flux all insinuated that this was a new Millsted with a taste for the epic.

That distinct sound would end up on their full-length album, Umm… Yea., where tracks El Delve and Dirty Elvis stand by the band’s rhetoric of indie and swagger, heavy and sweet.

Minilife Review of Umm... Yea! by Mini Life
Millsted is a band that has all the bases covered: a tight, explosive rhythm section, a vocalist with broad abilities and great command of his voice, and guitar work that is both innovative and...
p
A
n
E
F
Song Title by Artist Name