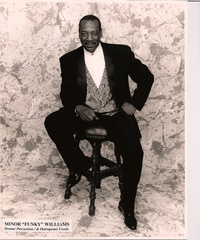 Born in Arkansas, and hung out in New Orleans where I honed my musical roots and developed into an International Musician and Performer on the Jazz & Blues & Rock Concert and Festival Circuit. I have played and Sang and recorded with such notable acts as: Con Funk Shun,The Barkays, George Clinton & the Funkadelics, Natalie Cole, Teddy Pendergast, Blood Sweat & Tears, Johnny Guitar Watson, A Taste of Honey,Peabo Bryson, Marvin Holmes Band, The Gap Band, "Her Louisiana Highness" Irma Thomas, Maxine Howard, Bill Campbell, The Coasters, Albert Collins, Sir Boz Scaggs,Hank Ballard and the Midnighters, The Drifters, The Platters, The Shirells, LaVerne Baker, Lloyd Gregory, The Big Belly Blues Band,Tower of Power, and Saint Gabriel's Celestial Brass Band. Some of my work can be heard on the MCA GOLD RECORDS "Spark of Love" - "Love Current"-"Choosing You", and "America Eats it's Young" with the Funkadelics. I have also recorded commercials for Orville Redenbacher's Popcorn and Motts Apple Sauce. I try to always be a High Energy, Performer a constant Showman and total Entertainer. When not touring with major Acts, I front my own band for Night Club dates, Weddings, Casinos, Corporate events and Private Parties.

An Ultimate Entertainer by Bartholomew Buford Buffington
I have witnessed Minor Williams entertaining in a small pub and on major concert stages around the world, and he has never failed to thrill the audience with his wit, stage manner and vocals. He...
p
A
n
E
F
Song Title by Artist Name