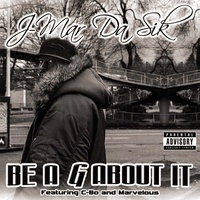 J-Mar Da Sik is an emerging hip hop artist from the Pacific Northwest. His mix-tape "Off Wit They Heads is available for free download. See Link (http://limelinx.com/files/faab1633987356386a1e49a4f71e790e) His sophmore album entitled "Be A 'G' About It" is now available. It has guest features from C-Bo & Marvelous. His freshman album "Go Get It" started the new era and new grind for Du4Self Records. His style and sounds are smooth like jazz with metaphoric lyrics that tells stories that paint vivid pictures of urban northwest living. He has shared the stage with Young Buck, Mike Jones, Method Man, Clipse, Devin the Dude, and E-40 to name a few. He is currently working on a new album titled "Cognac Lounge". For more info on J-Mar Da Sik Please visit Du4Self.com. For Booking contact 253-273-5164 or email du4selfrecords@gmail.com.

J-Mar / Devin The Dude by The Stranger Seattle Newspaper
That same night, the chiefer's (second) best friend, Devin the Dude, is coming to Neumo's, along with Portland's own backbone, King Cool Nutz, as well as Neema, J Mar, D.Black, and the Parker...
"Dead Wrong" by J-Mar On KEXP by KEXP SEATTLE RADIO STATION
The single "Dead Wrong" from J-Mar Da Sik "Be a 'G' About It" Album is in the rotation playlist at Kexp Seattle, Wa Radio Station as on Jan. 31, 2010.
Artist Feature J-Mar May 2010 by The Movement Fam
J-Mar Da Sik Interview with The Movement Fam took place May 2010. Please click the link to read the full interview.
Local Rapper Has Big Plans For The Future by Tacoma Weekly
Local rapper J Mar Da Sik has a new album, tour dates lined up and big plans for the future. J Mar lived in Spokane until he was about 13, then moved to Seattle. As a teenager he was in a rap group...
J-MAR, SEATTLE’S “SICKEST MC” RELEASES “BE A “G” A by FAST PITCH
Du4Self Records announces the release of Seattle MC J-Mar’s second solo album, “Be A “G” About It,” the follow up to his freshman release, “Go Get It.” J-Mar, originally born in Spokane, moved to...
J-Mar Nominated for MC & Album Of the Year by The Volcano Weekly Newspaper
HIP-HOP IN THE 25360: 2009 Awards! Vote now online By Jose Gutierrez Jr., M.Ed. on December 29, 2009 The Year — she’s up Ahhh, The final installment of The 25360 for 2009. I’ve been at it since...
Radio Spins by x104.5
To Whom It May Concern: This letter is to inform you of the artist “J-Mar” spins on KMIH – X104 in Seattle, WA. For the song “Go Get It” he has received 126 spins to date. His other song “I'm On...
J-Mar's Performance At The Corner by The Stranger Seattle Newspaper
* Mobile Line Out Music & Nightlife Slog News & Arts « New Music From the Gossip - "Heavy... | Also Tonight in Music: DJ Sega » Saturday, April 25, 2009 Last Night Fatal Lucciauno @ The...
Be a 'G' About It album Review by The Stranger Seattle Newspaper
Check out universal NW soldier J-Mar Da Sik, born in Spokane, lived in the South End (peep the overpass in front of Franklin High on the cover), the Eastside, Atlanta, and more, soaking game. J-Mar...
whats the word. j-mar da sik mixtape release by the Volcano weekly newspaper
WHAT'S THE WORD?: "Off With Their Heads" J-Mar Da Sik takes his place By Josh Rizeberg on May 18, 2011 J-MAR DA SIK: Conscious and creative / courtesy photo Total Recommendations (0) Leave A...
p
A
n
E
F
Song Title by Artist Name