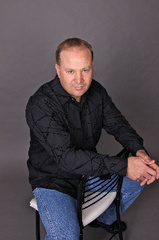 Bladenboro, North Carolina native Jerry Martin has over 17 years of professional stage experience. Singing and performing all across the United States and into Canada, Mexico and the Bahamas. Jerry has such a tremendous vocal range that will astonish you when you here him. Jerry has performed in front of 20,000 plus fans at the Agri/Expo Center in Louisville, KY to the Hollywood Bowl in Hollywood, CA. He has performed at Boston Symphony Hall as well as some of the largest concert halls and arena's across America. Get ready for the music and the voice of Jerry Martin! He's coming your way!

Jerry Martin Hits Radio! by
Jerry Martin has just released his new debut CD "Worth The Wait". Now playing on Seacoast FM. Be sure to check out the CD 'Worth The Wait" and request the debut single "Worth The Wait" at a radio...
Seacoast FM Interview by
Jerry martin will be interviewed by Seacoast FM very soon. You can find out more by visiting www.seacoastfm.info or Jerry's website at www.martinsmusiconline.com Make sure you tune in for this...
p
A
n
E
F
Song Title by Artist Name