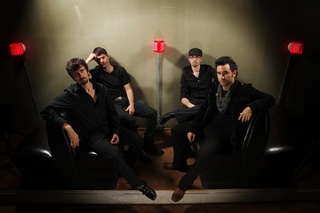 My Radio is a melodic rock band that began with a chance meeting between Boston singer/songwriter JP Powell (Chauncey, Bleu and My Favorite Relative) and drummer Hunter Johnson (Down Dexter and Justin Jones). Guitarist Brett Lemon and bassist Jeff Hofmann quickly joined the pair to round out the group. My Radio has been playing venues (Iota, The Mercury Lounge, Local 506, Lizard Lounge and Arlene's Grocery) and festivals (Floydfest and Steppin' Out) up and down the East Coast ever since. After self-releasing their debut CD titled “Give Us The Sun,” My Radio signed with Ocean Park Music Group out of Santa Monica, California. They have already landed placements with Fox Sports and are currently featured in the movie and trailer for The Joneses starring Demi Moore and David Duchovny. In addition, My Radio’s song “You Are OK” has been selected as a semi-finalist in the International Songwriting Competition for 2009.

My Radio Gets Airtime on Television by The Roanoke Times
The band name My Radio conjures up an obvious image.But this Roanoke act doesn't believe radio is the best place to break a new band. Then again, My Movie or Television Placement doesn't have quite...
Roanoke Times Review: My Radio w/ the Old Ceremony by The Roanoke Times
Roanoke TImes-Monday, November 5, 2007roanoke.comConcert review: The Old CeremonyEclectic band headlines show full of good music at Dumas CenterauditoriumBy Tad Dickens | 777-6474A space once known...
Not Quite a CD Release Party by The Roanoke Times
FRIDAY My Radio With Colourslide So, My Radio has a new CD. But it's not "officially" releasing it. In this age, maybe the best thing is to get the songs placed on TV shows, commercials, movies and...
Underground Music Scene by City Magazine
My Radio have been tuning up the Roanoke Valley indie-rock frequencies and gaining steady head wind over the last year. Consistently strong live performances have earned them considerable street...
p
A
n
E
F
Song Title by Artist Name