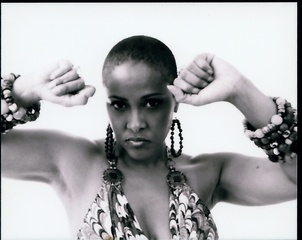 What do Madonna, Arrested Development, & Jimmy Buffett have in common? Nadirah Shakoor! Migrating from Texas to California, she studied commercial voice and became a premiere session and back up singers for major tours. 1993 Nadirah received a Grammy nomination as feature female vocalist of Grammy winning Hip Hop group Arrested Development. The groups leader, Speech produced her CD “Soul Power” EMI, Japan. Nadirah and world renowned DJ/producer, Yoruba Records founder Osunlade collaborated on a collection of R&B songs for a CD called “NadirahSongs”. As a team Nadirah and Osunlade have taken the world of “House Music” by storm with their club hits “Tree of Life”, “Love Song”, “Just a Breath Away”, “Pride”. 1995 Nadirah joined Jimmy Buffett’s Coral Reefer Band. Her latest CD, “Nod to the Storyteller” is a tribute to Buffett who for 15 years has featured her in his mega concerts.

Nadirah gives New Orleans Jazz Fest a Love Song by By: Molly Reid
He thought that my lyrics tend to get a little deep at times, which is true," Shakoor said. "He asked me if I could just write a love song. So I did.
p
A
n
E
F
Song Title by Artist Name