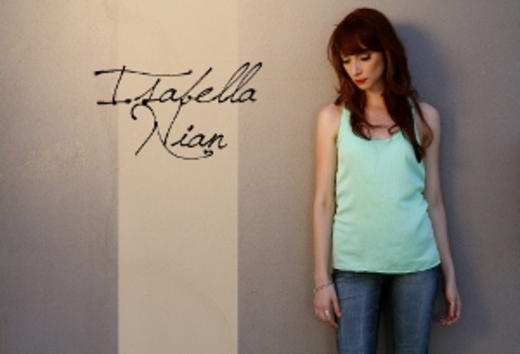 Isabella Nian is a Mexican singer/songwriter born in the Northern Mexican state of Chihuahua, and who now lives in Orlando, Florida, where she is currently working to establish herself as a Ballad/Pop Ballad/Folk Pop Spanish singer.

With a fusion in her voice of notable artists such as Celine Dion, Mariah Carey and Melissa Manchester, she imprints her unique style to her music by showing the ease with which she sticks to her genre.

On September of 2011, Isabella unveiled in her youtube channel an impeccable Spanish adaptation of the song “Rolling In The Deep”, originally performed in English by the famous British singer Adele. The translation and melody were so well adapted to the original, that it immediately became the favorite Spanish version of such song in many Latin American countries like Mexico, Chile, Venezuela, Peru, Ecuador, and Argentina. Such was the impact from the latter, that she was contacted for an interview via telephone by a radio station.

As far as networking is concerned, besides generating thousands of hits in her youtube channel,  Isabella Nian can also be found on Facebook and Twitter, as well as on her website: “www.isabellanian.com”. It is by such means that she remains connected with her fans.

With her single “El Alma En Tí” (The Soul In You), her first EP, “En Busca De Tí” (In Search Of You), is getting great reviews by fans in Latin America, and the Spanish speaking audience in the U.S.

This production was performed by Billy Chapin, who ventures as a producer into the Latin market with Isabella, and the sound engineering eminence, Eric Schilling. Both of whom have worked with names like Don Henley (The Eagles), Sister Hazel, Bob Dylan, Aretha Frankling and Backstreet Boys, as well as the Grammys Ceremony, Gloria Estefan, Chayanne, Juan Luis Guerra, Julio Iglesias and Shakira, respectively.

As an independent artist, in addition to local gigs and occasional online concerts through stageit.com, Isabella Nian continues her promotional campaign in which the main promoter it’s you, the fan. Through emails and posts in different social networks, her current fan base recommends and promotes her music with friends, coworkers, and family members.