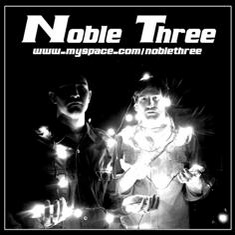 Three Noble Strains. According to Celtic mythology, the musician of the gods, Uaithne, fathered three sons with his wife, Boann. The first son was birthed in great pain and sorrow, the second was born in joy, and the third made Boann extremely tired. These three sons all became harpists like their father and were representative of the Three Noble Strains of music: joy, sorrow, and the physical.

Taking their name in part from this myth as well as a combination of their names, Noble Three has been a labor of love over two years in the making. Acting as more or less a front for the two Nashville-based singer-songwriters Patrick Rickelton and Tres Crow, Noble Three was born slowly but surely out of Rickelton and Crow’s mutual adoration of 60’s pop and mid-90’s alternative. As two of the principal songwriters for Nashville favorites Greenland, they made a brief appearance on Good Morning America based on the strength of Crow’s bouncy number, “The Way It Is.” The song garnered Greenland the Best Song award in the YouTube Underground video contest and helped solidify Rickelton and Crow as up-and-coming songwriters.

With the increased attention from the YouTube victory, Rickelton and Crow recognized the need for an outlet for their large back catalog of songs. After months of flirting with the idea, Noble Three was formed in earnest and in the summer of 2007 the two left Greenland to focus on Noble Three exclusively. In the fall of 2007 they released their first eSingle, When You Walk, as well as a b-side, for free download online. Working closely once again with producer and multi-instrumentalist Josh Fuson, Noble Three released its second eSingle, Shipwrecked, along with two more b-sides, in February of 2008.

Noble Three believe that creating music that is both beautiful and honest is a worthwhile venture in an art world dominated by clichés and the preening of the Hollywood glitterati. Their music is a blending of their different but complimentary personalities; Rickelton, a gentler soul, mixes breezy pop with worldly wisdom, while Crow’s passion brings the music a sense of urgency. It is this dichotomy that will surely command the attention of the listening public.

Noble Three: "I Would Run" by National Public Radio
NPR.org, May 6, 2008 - The music of Noble Three is filled with longing. Hearts are broken, days are lonely, promises are broken. But the Nashville, Tenn. duo tempers their melancholy with an...
p
A
n
E
F
Song Title by Artist Name