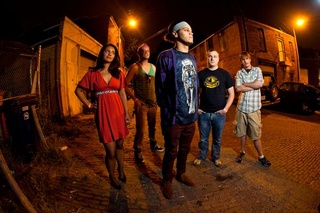 Young, hot, and a hell of a lot of fun-that is Once Okay Twice in a nutshell. The band has received positive reviews and acclaim from many local outlets and their following just keeps growing. Creating their own style of indie rock music, complete with an electric violin and DC references, there's not much more you can ask for." -District of Sound

by District of Sound
To know them, is to love them. The sweethearts of the DC music scene ... with their inspired blend of rock, pop, and chamber [Once Okay Twice] offer listeners dance worthy beats, flying chord...
by On Tap Magazine
Once Okay Twice knows how to connect with the audience through catchy lyrics that you can sing along to, and energetic, simple rhythms that get you up off your ass and bouncing along with the...
by Ocean City Today
Once Okay Twice’s music blends smooth melodies with funky rhythms and simple lyrics to produce what is certainly a blessing to music fans tired of listening to the mixed bag of cover bands that...
by Washington City Paper
We're only going to tell you once. OK, maybe more than once. ONCE, OKAY TWICE is a band to watch. Actually, a band to listen to, loudly and often.
by The Washingtonian
When asked to describe the Once Okay Twice’s music in one word, members of the band give a variety of answers from “svelte” to “democratic” to “ours.” It isn’t surprising that they all have...
by BrightestYoungThings
It is high time we do something on Once Okay Twice. The band has been putting out EPs like no one’s business, playing literally every venue you’ve heard of in DC (even some you probably have not...
by District of Sound
Lauded by many in the DC music community as a solid band with unlimited potential, they reminded listeners of their musical prowess on stage and funky personas that come through in their music.
p
A
n
E
F
Song Title by Artist Name