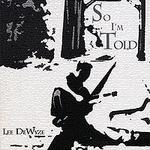 Amongst the music genres of Folk, Emo, Pop, Rock, Alternative and Jazz there lies a space of sonic soundscape that Lee Dewyze inhabits. Dewyze cunningly uses that space to pull listeners in different directions so that each person can connect with his songs on their own personal level. "I want a connection with my audience in the sense that any song I do reminds them of a specific moments in their lives-not mine...I want listeners to say 'Wow, he was there when that happened to me.'...It..s comforting to share my experiences and know that all the vivid, raw emotions that I felt are universal to all of as human beings." Dewyze is the type of artist who can change directions in mid-stride, when you think he..s going left- he goes up, when you think he..s going back- he goes right, and keeping in tune with him has kept producers Louis Svitek and Ryan McGuire on their toes. Svitek notes "he always has a new idea and that..s great, he also is focused on perfection and when his songs work, they touch on so many levels of the human condition that it is scary." McGuire adds "his level of talent exceeds many artists twice his age, he never tires of doing the track 'til it..s the way he feels it should be. As a producer that makes my job easier." Soulful, haunting and melodic are the drop words used to describe the music of Dewyze, but he hopes that the end product means so much more to listeners. Give "Dreaming Alone" a spin and try to kid yourself that you..ve never felt the way the artist feels at that moment. Next up is The Problem Is You.It speaks for itself.Remember, Dewyze knows what he is doing as he pulls his listeners back to their own memories and emotions. Listen for yourself and your soul will follow.