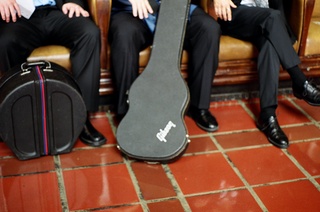 Armed with infectious melodies and inventive, quirky lyrics, singer/songwriter Anthony Nigro formed the band while attending school at the University of Arizona in Tucson, where the Osgoods performed as a trio and recorded 1999's Assistant Manager EP before relocating to Los Angeles in 2001.

For their first full-length effort, the trio effectively mixed lush vocal harmonies and pop hooks with a raw production style. Automatic Do-Over, was released in 2002 and was very well received by fans and critics alike.

Accompanied by new drummer, Dan Hull, the band then began work on material for Smother & Shrink. Released in late 2006, it is the trio's most ambitious effort to date. The record features fan-favorites, Steady and You Made It Easy (2006 International Songwriting Competition finalist & 2007 semi-finalist) among other great tracks.

A final line-up change that same year welcomed bass player and skilled backing vocalist Chris Evans into the fold. The result is a rock-solid rhythm section that rounds out the Osgoods sound and contributes to the group's knack for charming audiences with their distinct brand of agitated pop.

The band has been most recently featured or heard on KillRadio.org, The Ruben Blades Show, Cal State Long Beach Radio, KAMP Radio (Tucson), 87.7 FM (UK), EmergingArtists.com, Westside Will Radio, and within the pages New Music Weekly, Amplifier Magazine and others.

Aotomatic Do-over (album review) by Outersound.com
The Osgoods hybridize a hothouse of influences, with delightful results. Predominant is a bouncy Britpop strut (originated by the Small Faces, popularized by T Rex, Bowie and Queen, and heard more...
Live review - Los Angeles by TheLAMusicScene.com
The lofty, cramped soapbox-ish stage at The Joint is an interesting challenge for bands who play there; it's a wonder bands can comfortably fork out great music. Saturday night the Osgoods...
Smother & Shrink (album review) by amplifiermagazine.com
Within the confines of your traditional power trio, Osgoods (viz. Anthony Nigro on vocals/guitars, Dan Hull on drums/percussion and David Jurs on bass) contrive to cover much sonic ground on this...