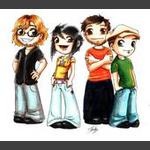 Already considered one of the year’s hottest discoveries, Pascale Picard is at the center of this dynamic young collective. From the hint of a smile to the darkest fury or the deepest melancholy, we catch a glimpse of the boldness of this daring young songwriter as she deftly weaves modern folk-pop colours through alternative textures. The result is solid compositions, firmly rooted in rock. Intensity and complexity in a voice worthy of attention!

Surfing with her guitar through 12 contemporary tracks that will either shake or comfort you – or both – Pascale Picard bursts onto the scene with the very personal me, myself & us. A strong and engaging first recording that will herald her arrival on the national scene… For the singer/songwriter there is no doubt that the success of the album is the pleasing outcome of the solid collaboration with her band. Travelling through the sonic landscape you’ll detect the unmistakable strains of the jazz/electronica inspired guitarist (Mathieu Cantin), the bassist who paid his dues in a Pearl Jam cover band (Philippe Morissette), and a drummer who has World Music running through his veins (Stéphane Rancourt). These first-rate musicians are loaded with rich experience on the scene. The cohesion is absolute, both on record and live.