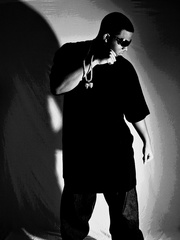 Whasup Everybody This is your boi LeMarr aka "Phenom" and i have been rapping since The age of 6. Very gifted at the rhymes if I may say so myself, But I am not tooting no horn. My cousin Carlos AKA "Cream C" got me into rapping. I started out watching them freestyling in front of our grandmothers house, I really couldn't freestyle but i always tried. I got good at writting my lyrics and started writing alot of stuff. Right now im still perfecting my craft, but there isn't many rappers that i know that can put rhymes together the way i do. Many people have told me that I should put out a CD but i never wanted to because rapping was just a pass time for me. I didnt want to make it a job. But your Boi has finally broke down and said forget it, now I am about to grant everyone's wish! Its time for you guys to meet one of the illest rappers Coming out of The A. I am Now working on Freshman Album "Time To Shine"

A DJ booth, Speakers with good sound quality, And at Least 2 Wireless Mics.

Phenom Has Grown Wings!! by From Phenom himself
Yes sir!!!!!!! Your boy Phenom has now Officially Grown Wings!!! Phenom Has Joined the United States Air Force, and will be departing for his basic training. Phenom is very proud to serve his...
p
A
n
E
F
Song Title by Artist Name