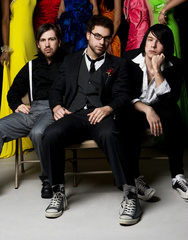 Plushgun is a project birthed in the cramped confines of Dan Ingala's overpriced and undersized "bedroom" in New York City. While writing a song on his acoustic guitar, Dan had an idea: "what if I added some synths to this?" And synths he added, and this song is known today as "Just Impolite." Dan incorporated the name Plushgun to this project, as in something soft, something killer.

"Just Impolite" hit Myspace in February of '07, and in just months, through word of mouth, the project spread from one fan to another, until it was heard by RagTag productions, producers of the popular "We Need Girlfriends" web-tv series who approached Dan about using his music in their show. Plushgun was then introduced to a new audience, and Plushgun's popularity grew exponentially.

When people started to demand live shows, Dan was scared. It was just him and a computer, and computers tend to be terrible showmen. So he asked for help from past acquaintance, guitarist, and showman extraordinaire Taylor Armstrong to bring this project to the live stage. Plushgun then absorbed the talents of Pearson Constantino, a drummer whose ability to compete with electronic drums was unmatched, and Sam Kim aka "Kamuela", bassist, backup-singer, actor, and all-around cool-dude.

Plushgun's songs are nostalgic, poppy, dance-able, and surprisingly deep. Whether they are about chasing dying romances ("Just Impolite"), high-school anxiety ("How We Roll") or angst-riddled anthem's for a lost generation ("Dancing in a Minefield,") Plushgun tackles these themes with unabashed catchyness in an electrolicious soundscape.