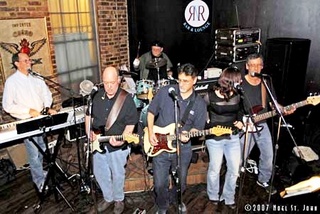 Point Blank is an experienced cover band (primarily classic and contemporary rock) that has been playing in the Northern Virginia-DC-Maryland area for 15 years and has a large regional following. The band plays songs from the 60's to today. It has six members: drummer, keyboards, bass, two guitars, and vocalist. The keyboardist, bass player, and one of the guitarists also sing lead and backup vocals. The band members, except for the female vocalist, are in their late 40s and early 50s and are all accomplished musicians. The female vocalist is in her mid-20s and is extremely versatile and comfortable performing rock, blues, and modern country. The band plays a bit of everything from Aerosmith to ZZ Top. The band was featured in an in-depth article in The Chantilly Times newspaper in early 2006.

The band requires an area large enough to accomodate our six members and our sound equipment. We provide all our own sound equipment and are accompanied by a professional audio engineer at every performance. The drums are also internally miked.