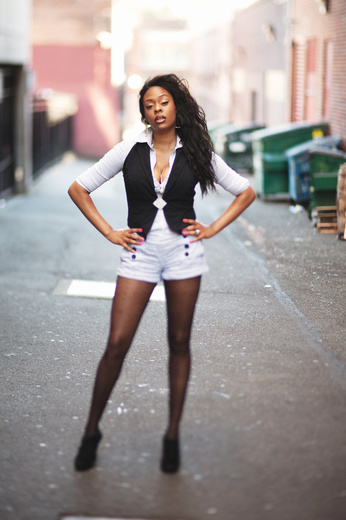 Portia Monique is here to change the face of Pop and R&B Music. This phenomenal vocalist has a commercial sound that is instantly recognizable, and a style that is a seamless fusion of Neo-Soul, R&B, Pop and Hip-Hop. Her voice is as distinctive as her look; this model woos her listeners with unique and edgy song concepts, jazzy vocal tricks, and complex vocal harmonies. Writing songs since she was 9 years old, Portia has a knack for lyrical prose that is nothing less than incredible. A prominent musical figure in Seattle, she built her local reputation through weekly performances at lounges and collaboration with Eight 4 Fly on the track “Radio,” which became an instant hit on Hot Jams 88.9 FM. In addition to “Radio,” Portia is currently collaborating on her first independent album with Seattle’s hit music producer Illoquint, with bonus tracks in partnership with the Los Angeles production duo “The Finisherz.” Though Portia is still in search of a major record deal, her skills have been personally acknowledged by Hit maker Rodney "Dark Child" Jerkins, soul singer Raheem Devaughn, mega producer's Midi Mafia, and Vanessa Brown of Showtime at the Apollo. She has worked with industry producer Kyle West (Donnell Jones, LL Cool J, Tevin Campbell), been showcased as a Featured Artist on Houston’s “The Kitty Williams Show” (www.thekittywilliamsshow.fm), and has shared the stage with internationally known recording artist Choklate. Influenced by artists Beyonce and Zap Mama, this young woman has developed an eccentric yet universally appealing sound that cannot be replicated. With plans to bring the passion of 90s R&B into today’s Pop, her signature voice, style and look, will never cease to turn heads, perk ears, and captivate minds. The musical elite should stand poised to celebrate the captivating sound of dominant pop culture’s latest arrival, Portia Monique.

December 2009 Gucci Mane "Puts You in the Spotlight” Premium Channel

Captivating... by Tha Northwest
Writing songs since she was 9 years old, Portia has a knack for lyrical prose that is nothing less than incredible. A prominent musical figure in Seattle, she built her local reputation through...
p
A
n
E
F
Song Title by Artist Name