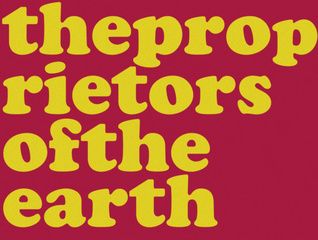 Proprietors of the Earth

The Proprietors of the Earth come across similar to an abstract painting. Their colors bleed and fade across the aural canvas simultaneously delivering both the gentle and the cacophonous.
Discontent with the notion that there is a need for genres, the Proprietors equate progression with a deviation from the norm. Drawing from a variety of influences, both obscure and otherwise, the Proprietors of the Earth attempt to cover the entire spectrum of sound with notes and noise and instruments and voices.
The music contains the profound, the simple, the gentle, and the abrasive. Utilizing various techniques ranging from sampling, looping, and synthesis, to raw bare-bones improvisation, their music becomes a potent fodder for the mind. Out of Norman Oklahoma, Clement Silvers (bass), Geoffrey Burch (keyboards), Fred Bidwell (guitar), and Kris Dorrough, (drums), care not whether their music is branded as "good" or "progressive." Instead, they are motivated by the seemingly insane drive to deliver a message through music that is all their own. Meanwhile obscuring the parallel between the size of the ensemble and the dynamic range and impact of its sound.
The Proprietors are here to reclaim the precious real estate that is the Earth and invite all to come along for the ride.

We are currently finishing work on our debut full length studio LP - OSOS, for release early spring 2009. We also have been developing the first installment of the PoTE video game also due out around March 2009.

Along with independently recording our studio album and developing a video game we also built a remix website - OSOSmusic.com. Based around community the site allows anybody to submit audio, video, blog, art, remixes, and so on. We have released source files for the song OSOS from a variety of sources - studio and every live performance of the song that is recorded is uploaded to the site for remix. Users can download all the source files and then remix into one, basically you can take different parts from different nights and mix into one, so if you don't like the guitar from a particular night you may use the recording from another night and so on, then re-post and allow other users to modify your work all based on a creative commons license.

Proprietors Of The Earth 09-20-2008 by OSOSmusic.com
09/20/2008 The Farm Norman, Ok Set I: Jam > Shadow Man, Hey Now > Habitual Residual, OSOS > Celestial Three, Candle In The Dark Set II: Sacrifice > Slim Combo > Space > Sacrifice,...
Unconventional is the key: A Sauced New Years Eve by NONzine.com
Ah, the holiday season… for many the holidays bring cheer, gifts, and lots of good eats. For the rest of us, it is merely a prelude to the liberation of December 26th and consequently the countdown...
Proprietors of the Earth plays the Deli on Tuesday by independentclauses.com
Briefing: Proprietors of the Earth Oct. 23 I have only been able to see this band once, but they are a local favorite for sure. They have a very eclectic taste that encompasses many genres to bring...