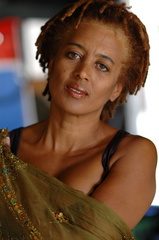 BIO MIRI HUNTER HARUACH Actress/Singer/Musician (World/Folk/Spiritual) Acclaimed by BC Touring as "…dynamic, unique and mesmerizing…” Miri Hunter Haruach is being billed as one of the finest, up and coming folk/spiritual singers America has produced since Joan Baez or Tracy Chapman. Her soothing, crystal clear voice and poetically inspired arrangements display a depth and breadth of range that are earning her a rightful place among the world's finest folk singers. Miri’s newest CD “The Ways of Love,” distributed by her label, Project Sheba Music, is an uplifting compilation of nine songs; each written by Miri and each based on one of the Psalms. The spirit of these Psalms is a testament to Miri’s real passion – the desire to empower humanity. The song titles on “The Ways Of Love” are life-affirming and positive and beneath the simplicity of Miri’s songs lies her ability to give expression to any composition. “The Ways Of Love” is a labor of love and the result of inspiration Miri received from a range of music including World, North African and Middle Eastern. Miri began her Folk/Spiritual music career in 1999 with the release of her first CD “Harvest Of The Heart” which was selected by Independent Music Group (IMG) as a semi-finalist for CD of the Year. INDIESONGS also awarded Miri an Honorable Mention for Song of the Year for “Southern Lullaby,” a sensuous song from the Harvest CD. She is also a three time recipient of an ASCAP music grant for songwriters. Born in Roanoke, Virginia, Miri Hunter Haruach (Hebrew meaning “spirit”) is of African-American, Native American and European descent and converted to Judaism in 1994. A deeply spiritual woman, she has volunteered at the Jewish Coalition for Literacy and was an advisor for The Isaiah Project, an African-American/Jewish organization. She is past President of the American Academy of Religion, Western Region and presents at conferences around the world, speaking on topics such as women’s spirituality and diversity versus multicultural and social activism. She is also a gifted poet who has been honored with several awards including a feature in the 2004 International Who’s Who in Poetry. Miri earned her Bachelor’s Degree from the University of Tampa where she majored in Music and minored in Theatre. She received a Master’s Degree in Playwriting from the University of New Mexico. As an actress, Miri has toured nationally with her one woman shows “Grandmothers of the Universe” and “The Queen of Sheba? Yes I Am!” She has performed in various stage productions such as Jacques Brel at the Actors’ Ensemble in San Francisco, 15 Minutes of Fem and Comedy Union, both of which ran in Los Angeles. She has also performed with the Los Angeles Women’s Theatre Festival for two consecutive years. Miri is currently working on her next one-woman show “The Pregnancy Diaries,” about a woman dealing with relationships and coming to terms with her own life changes. Miri currently lives in Los Angeles where she writes, performs and lectures. # # #

A Break from Conventionalisms by MARCELLA CIRIGNOLA
MIRI HUNTER HARUACH:THE WAYS OF LOVEProject Sheba MusicMiri Hunter Haruach breaks with many conventionalisms related to World Music and Folk with admirable ease, only taking those elements truly...
Knock-out Debut by Backroads Music, Califonia
MIRI HUNTER HARUACH "The Ways of LoveMiri Hunter Haruach's knock-out debut "The Ways of Love" benefits from the production and contributions of Linda Tillery, but it is Miri's own creative...
Haunting by Ted Boothroyd
JAH Works Magazine“Haunting” isn’t a word I often use to describe music, but it applies to The Ways of Love. It has nothing to do with ghosts, and everything to do with Miri Hunter Haruach’s “warm”...
A Great Listen by Todd Williams
ROLLING OUT……AtlantaCategory: Studio, Beats Project Sheba MusicMiri Hunter Haruach returns with the Book of Psalms-inspired “The Ways of Love.” The sparse “My Soul Will Be Restored” has an...
Psalm-thing to Sing About by Karla Blume
The Jewish Journal of Greater Los AngelesHave you ever thought about what makes a good song? The Virginia-born Miri Hunter Haruach, who lives in Los Angeles, is a folk singer, playwright, student...
p
A
n
E
F
Song Title by Artist Name