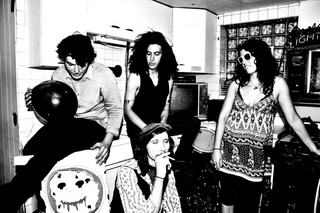 Check out www.rabblerabbleband.com for more info and media! Rabble Rabble is a psych punk band that hails from Chicago, IL . Their sound, developed over the course of the past four years, has grown into a contemporary take on psychedelic rock. Guitarists and vocalists Todd McCafrey and Ralph Darski, the two original members of the band, create a complex layering of sound rich with blues undertones and frenetic guitar play. They solidified the lineup with drummer Kaylee Preston and bassist Matt Ciarleglio.

CHIRP + CHS Session with Rabble Rabble by Erik Roldan via CHIRP
Seeing “Jailbait” and “Bangover” listed as the names of two available singles by Chicago quartet Rabble Rabble, you start to get a sense of their intentions. Low-end Stooges sleeze with a yelpy...
Listen: Rabble Rabble by NICK FREED ON APRIL 29TH, 2010 IN COS EXCLUSIVE FE
Chicago quartet Rabble Rabble has quickly been making a name for themselves in the eclectic Midwestern music scene. Between being voted Chicago band of the month in the November 2009 issue of Deli...
Rabble Rabble – Bangover by AUDREY LEON IN: Loud Loop Press
Describing Chicago quartet Rabble Rabble’s music as “punk” is wrong. I say this not because I hold some idealized standard of what punk rock should be, but because it’s too simple to be accurately...
Giant System 013, Rabble Rabble: Video by Dave Cantor, Time Out Chicago
This is a live band. Rabble Rabble’s draw is healthy enough that last Halloween, despite playing against a Roky Erickson show, the band packed a performance at a venue that will remain nameless.At...
p
A
n
E
F
Song Title by Artist Name