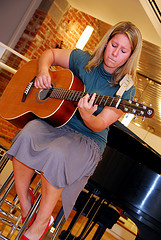 I'm a 21 year old singer-songwriter who was born and raised in Chicago, Illinois. One day when I was 12 years old, I was home alone and decided, "Hey, I could totally write a song better than the stuff the Backstreet Boys sing!" So, that day, I picked up my guitar and started writing. 4 years later, I started high school and finally had songs I was proud of. The best songs from my high school career were compiled into an album I released in 2005 titled "Come As You Are". Now that I am entering my last year as an undergraduate student at American University in Washington, DC, I have two albums to show for it. I recorded my second album (which is scheduled to be released later this year or early 2009) "Between Timid and Timbuktu", which is very based in the blues. I grew up around music and studying jazz, so it only feels right to showcase my love for America's music and our blues roots by incorporating it into a lyrically driven, soulful blend of acoustic music.