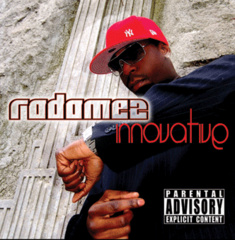 How does one stay true to who they are, in an industry where conforming seems to be popular? Truthfully this is not a difficult feat, though many find it hard to accomplish. If you want to know how this can be done, simply ask Radamez. He realized early that he couldn’t be everything to everyone, so he opted to stay true to himself and created from his soul. The result….each release (The Unexplained, Innovative, & Experience The Experiment: Valium One Mix Tape) has been in high demand, causing his fans and critics to wonder, “What’s next?” Radamez, born Ramel Joseph Williams, has just released his best body of work to date. On Experience the Experiment: Valium One, Radamez invites you into his lab and forces you to take notice of his versatility. He demonstrates how to remain an individual, while spitting lyrics of substance and riding a ‘hot’ beat. This piece of work is already bearing comparisons to that of Common’s “Electric Circus” and Mos Def’s “The New Danger”. Radamez prides himself on making music of substance which has not gone unnoticed. At the ASCAP Expo 2009 his song The Archeologist, from his album Innovative, was chosen for the Hip-Hop panel out of thousands of entries. He draws a great deal of inspiration from Jay-Z and Lauryn Hill, which has enabled him to bring a certain level of consciousness to his music. He writes lyrics as if he were asking himself, “How can I feed the hip-hop nation?” Though the story of his life reads like a book, shared by many, it is his execution of life that distinguishes him from others. The many life lessons learned while growing up in Carona Queens, New York are expressed in his music. Radamez is not to be mistaken for one of those artists who speak on subject matter, in which they are not familiar…He lives his lyrics. His music chronicles his life from New York to Kansas, where he earned a B.S. in Psychology to Indianapolis, where his musical career has begun to soar. An artist first, Radamez is also owner of Team Triumph Publishing Company. His music is very important to him and this is apparent to his fans and critics across the country. Once he reaches his level of satisfaction, as an artist, he plans to venture off into other facets of the entertainment industry. Radamez is making things happen and is an exceptional example of how you can stay real and still receive admiration and accolades from the masses.

A stage large enough for myself, my 3 guitarists, drum set, keyboardist and dj's equipment (can perform without a band with just a dj)

Local hip-hop artists bring a message to the mic by Indy.com Feb. 28th, 2008
Indianapolis based rapper Ramel "Radamez" Williams says positive rhymes are just one part of his repertoire. As leader of the Concrete Beats crew, Williams lists his specialties as party songs,...
Indy on the mic: They've got the talent and ... by INTake Weekly March 15th, 2007
"Indy on the mic: They've got the talent and drive. But how long will Indy's vibrant hip-hop scene have to wait to be seen? New York-raised local rapper Radamez, 29, another tall charismatic Big...
UNSIGNED HYPE by HYPE MAGAZINE Spring 2007
I'VE GOTTEN THE CHANCE TO SEE YOU PERFORM LIVE AND I LOVED IT. EXPRESS YOUR STYLE OF MUSIC: Thank you. I miss those days when we used to perform at the Guvernment. I love performing live. I love...
Homegrown hip-hop artist bring ... by Indy.com July 16th, 2008
HOMEGROWN HIP-HOP ARTIST BRING THEIR ORGANIC SOUND, PERSONAL STORIES TO BLACK EXPO: Year in and year out, Indiana Black Expo brings in some of the biggest music acts in the nation -- and this...