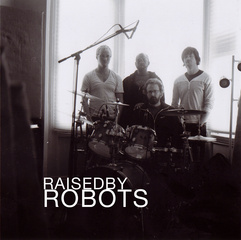 Raised By Robots' music is dynamic and urgent, yet thoughtful and cinematic. The audience will leave a live show knowing that this is a band they need to tell their friends about. In fact, the reader of this paragraph will leave this paragraph wanting to read more about this band.

Raised By Robots is a rock and roll band from San Francisco/Oakland that suckles lovingly on the teat of multitudinous influences - among them early 90s indie, soul, post punk, country, and hip hop - and ameliorates that disparate mash into a sonic reformation. RBR takes nods from certain acts - Why?, Okkervil River, Al Green, Johnny Cash, Thee More Shallows, Menomena, Jamie Lidell, Ms. John Soda, Tapes N Tapes, Sly, The Flaming Lips, The Arcade Fire, DJ Shadow, Damon Albarn, The Beach Boys - but have created something wholly unique. This band also believes strongly in an energetic & charismatic live show, which it has brought to fans in the bay area and up and down the west coast.

Mics: 4 vocal mics, 3-5 drum mics, and two guitar amp mics, as well as 2 auxiliary mics for peripheral percussion and toy piano. D.I. for keys and or 1 additional mic for the keys amps.