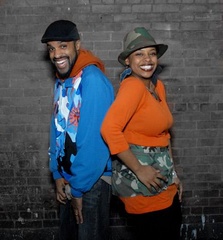 RAS is the hip hop duo of the century. Selected as 2008 Lennon award-winners, RAS has only begun to leave their musical mark on the world. This husband-wife team is going to make an impact on the entire universe with their uplifting lyrics, harmonies, and empowering spirit. After several years of performing as local (Providence, RI) solo artists on the theatrical and performance stage, Tiger Lily and Jbro came together in the summer of 2003 to create music together. The duo has been working hard over the last six years to manifest music and poetry that reflects a spirit of resistance to the prevalent and dominant 'storm' of music and art that exist today. Cited as the "next big thing in hip hop" by OURSTAGE blogger Bethaney Leavey, praise and attention has been rolling in steadily over the past six months. In August, RAS was featured in the '50 states in 50 weeks' blog. In October 2009, RAS was described on the OURSTAGE.COM blog as a team with "a whole lotta heart, and some mighty voices to back it up." Even further, OURSTAGE.COM has featured RAS' music on their home page and hip hop radio channel. Riding Against the Storm means to break free or fight against whatever mainstream media and culture offers the masses today. Through music and performance the duo hopes to not only inform, but also to uplift and create spaces where atrocities against people of the African diaspora can begin to heal. A healing that can manifest itself through remembering the past, exposing lies, expressing emotion, and resisting self-hatred. Aside from headlining many shows within the New England region, this dynamic duo has opened for KRS-ONE, K'NAAN, DEAD PREZ, SAIGON and ANTIBALAS. Currently, RAS is preparing to relocate to Austin, Tx.

HIP HOP DUO USES COMEDY as a tool for change by PROVIDENCE PHOENIX
N HOUSE FREESTYLESerious about being funnyAlthough African-American comedians have long been an integral part of America’s pop culture — through stand-up, Saturday Night Live, and the big screen —...
50 STATES in 50 WEEKS - week 8: RHODE ISLAND by OURSTAGE.COM - BLOG - AUGUST
RAS – Husband and wife duo RAS (Riders Against the Storm) might just be the next big thing in hip hop. Their song “Speak The Truth” won the Lennon Award in the hip hop category in last year’s John...
HIP HOP HUMOR by BROWN ALUMNI MAGAZINE - ONLINE
What's so funny about racism, police brutality, and Hurricane Katrina? Plenty, according to African-American activist, educator, and actor Jon Mahone '99. He's the director of In House Freestyle, a...
OURSTAGE - FEATURED ARTIST by OURSTAGE.COM - BLOG - OCTOBER
According to their bio, RAS has a helluva mission on their shoulders: to “fight against whatever mainstream media and culture offers the masses today …uplift and create spaces where atrocities...
ARTISTS ON A MISSION... by ITZAGOODLOOK
R.A.S. is a unique hip hop duo that lives by the statement, "IT'S BIGGER THAN HIP HOP." And together, Jonathan ‘Jbro’ Mahone and Ghislaine ‘Tiger Lily’ Jean-Mahone are more than just rappers: they...
Local hip-hop duo makes final round in nationwide by Providence Journal - May 2009
Riders Against the Storm are husband and wife Jonathan Mahone and Ghislaine Jean-Mahone.The Providence hip-hop duo Riders Against the Storm has advanced to the final round of the John Lennon...
p
A
n
E
F
Song Title by Artist Name