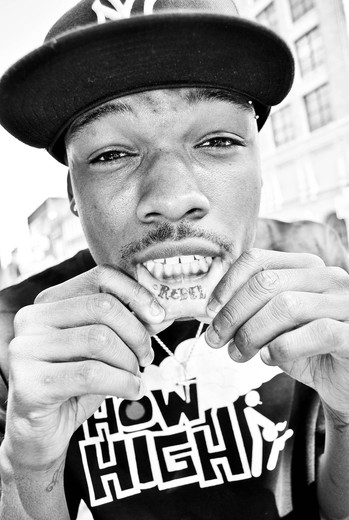 A “Rebel” is defined as ‘a person who does not obey rules or accept normal standards of behavior, dress, etc’, Ray Rebel’s moniker describes him perfectly. This self-proclaimed ‘weirdo’ is a 20-year-old rapper and tattoo artist , making a name for himself as a new breed of emcee in Memphis, Tn, a city most known for raunchy, gangster rap. Rebel’s stage presence and unconventional image has his name ringing in local and national circles.

As the old saying goes, a man is the product of his environment. That is definitely true in the case of the versatile Ray Rebel. Calling both Maine and New York  home as a child, Ray now resides in the city of Memphis, Tennessee where his East Coast swagger and southern style come together to make a unique mix. Rebel blends witty punchlines and wordplay with a melodic flow and edgy lyrics.
In 2011, Rebel connected with producers Sledgren and Cardo of Rostrum Records for his debut mixtape “College Life Vol. 1”. After hearing  “Weekend” (Prod. by Sledgren), the Rostrum family was so impressed they traveled to Memphis with director Dan Myers to shoot a video for the song (“Weekend” http://youtu.be/9NibIUXLZ20?hd=1).
Ray Rebel’s momentum continues to grow. He is currently completing his sophomore mixtape “College Life Vol. 2”,  which will boast more big name production and some memorable features. He is continuing to brand his “Weirdo” movement with tattoos and t-shirt designs. Plus his unique looks have been earning him gigs as a promotional model for a number of independent clothing lines. Rebel keeps his fans updated through his Youtube vlog “UFO Takeoff”.
For more on Ray Rebel visit http://RayRebelMusic.blogspot.com or email RayTheRebel@gmail.com

In Your Ears Next Interview w/ Ray Rebel by In Your Ears
MW: What is your name and your stage name? Ray: Ray Johnson a.k.a Ray Rebel MW: Where are you from? Ray: Born in East Machias, Maine. I moved to Harlem/Buffalo, New York then to Memphis, TN. Harlem...
p
A
n
E
F
Song Title by Artist Name