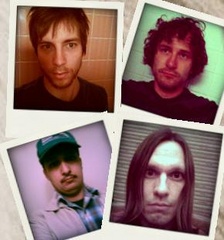 READYMADE BREAKUP Less thinking, more feeling. That's the simple philosophy behind Readymade Breakup's forthcoming record, Alive on the Vine. After several tumultuous years of constantly changing bandmates, failed brushes with the major label machine, and creative confusion, the band finally gave up and stopped trying… and finally made the rock and roll record they always had in them. The start of 2007 saw the release of the band's debut, Isn't That What It's For?, which received critical praise for its lush pop textures and sweeping melancholy. Singer/songwriter Paul Rosevear, bassist G.E., and keyboardist Matt Jaworski recorded the album bit by bit throughout 2006 with friend and producer Arun Venkatesh. The music was quickly featured by big names like Dunkin Donuts and Turner Broadcasting, received constant radio spins on NY/NJ rock and college radio markets, as well as maintained steady internet presence on blogs and playlists throughout the year. However after touring in support of the album throughout the year – with new guitarist Jim Fitzgerald added to the line-up and the return of drummer Spicy O'Neil – the band knew it was time to make a record that captured the soul and spirit they felt making music together live. Armed with a laptop, a handful of microphones, and any instrument they could possibly get their hands on, the group said goodbye to their day jobs, friends, and social lives and rented a small house at the Jersey Shore. "We basically moved in together and wrote and recorded every day, 10 hours a day, for about 3 months, just spilling out whatever ideas came naturally," says Rosevear. "We're not engineers and none of us had ever done anything like this before. But we knew what felt great and that's what this whole thing was about. Forgetting everything except what feels right.” But it wasn't all easy – without a producer involved, the tension mounted when it came to arguments over creative direction. "We fought," he continues. "I mean really fought. Usually over the smallest details – stuff you'd never even notice – but all that really showed was how much it meant to each of us. Everybody wanted to be heard." The stress of going broke, being isolated, and struggling to reach compromises was nearly as powerful as the music the band was creating. The result is perfect imperfection: noisy guitars, haphazard engineering, one take performances, pitchy pianos, improvised lyrics, and an unbridled sense of spirit that can only come from a band trying to make music they truly believe in. And now it's out of their hands and into yours. Try to not sing along with the bluesy swagger of "Ugly," or the soulful shrieks in "Stretch Your Head." Try to shake the straight rock vibe of "One By One" or ignore the cacophonous groove of "Honey, You Might Be Right." Try to not be moved by the bare bones vocals in "I Don't Mind" or the haunting guitars in "Talking to Myself." It's impossible. Alive on the Vine is a record that speaks so loudly to the members of Readymade Breakup that it is destined to speak loudly to anyone who hears it. As Rosevear belts in a desperate, fractured voice, "We will never quiet down," in the soulful "Quiet," you can tell the lyric isn't only true to the song – it's true of the band as well.

Someone who is capabale of working with a bunch of intermittently breaking gear. 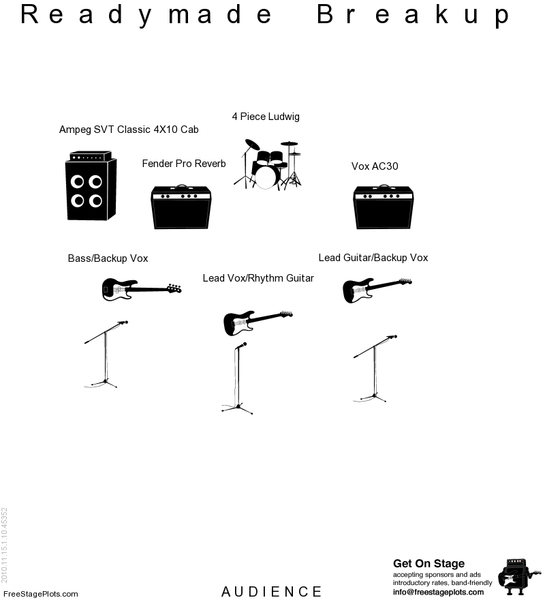 Jersey Beat by
Revel in the beatlesque melodies exquisite soulful falsetto, and some crunchy rock on this self-released gem from asbury park's kings of power pop.
Power of Pop by
Readymade Breakup reaches right across the late 60s, with rustic, twangy and guttural songs of distinction and potency.
Absolute Powerpop by
This is vintage powerpop with a radio friendly sheen. These guys know their craft and will not disappoint.
Blowup Radio by
Whether it’s the instantly catchy opening track “one by one”, the mellow harmonious beauty of “i don’t mind”, or the dirty garage-blues rock riff of, “honey, you might be right” (which sounds like...
Music-Reviewer.com by
A true piece of art. [Readymade Breakup's] second effort "Alive on the Vine" is by far their best.
Powerpopaholic by
The group has raised the bar and jumped over it. With not a single dud here in a very tight set of ten songs, this is crunchy power pop at it's best. It also makes it easy to recommend as a top ten...
Culture of Me by
Readymade Breakup covers all sort of ground in the capital-r rock and american categories "talking to myself" is a delightful, reverb-filled few minutes of lament and melancholy. this song is...
A Limerick Ox by
Their guitar hooks resonate with unflappable strength...singer paul rosevear’s voice shifts from soft and inviting to explosively vivid in a half-breath... choice piano chords give the melody a...
The Official Not Lame Blog by
Crafting silky-smooth, melodic crooning melodies is what this band is all about, so go with the flow and smile away. Simply, not to be missed! Crystal-clear production, crackling passion,...
You are so Relevant by
Recommended if you like good power pop, tom petty, and pre-bill berry leaving r.e.m.
p
A
n
E
F
Song Title by Artist Name