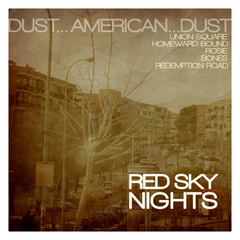 With the swagger of young Johnny Cash and the rhythmic immediacy of the Clash, Red Sky Nights wants to bring back the long-lost melody of yesterday into today's stifled music scene. Influenced by artists such as Elvis Costello, Billy Bragg, The Ronettes, Richie Valens and The Smiths, the band delivers honest tales of struggles of the heart, self-medication, and a battle cry to stand up to evil forces without and within. Sincere and wise beyond their years, the fetching lineup of singer Ben Clemons (The Killtakers), bassist Johnny Redman(SecondShot/Ligosi), drummer Peter Munro (Bombjacks), and keyboardist Ben Kettleson (The Glow) formed in early 2008. Unleashing skeletal remnants of a punk foundation in songwriting matured to reflect an appreciation for the fundamental appeal of retro soul, Americana, and Motown R&B, the band hopes to bridge the ever-expanding generational gap seen in music today.

Channeling vintage melodies in a digital era, indie rock band proudly announces their self-released debut EP, Dust…American…Dust, on Oct. 31 at NYC’s Ace of Clubs. In a groundbreaking move, the band’s five-song recording will not be released on CD—considering that format obsolete in the iPod age, they have created their own WristBand™ USB flash drive to revolutionize the delivery of music and media to its adoring audience. The sleek flash drive rubber wristlet will include Red Sky Night’s new EP, lyrics, and photos, and will link directly to the band’s Myspace and Ourstage pages. A vinyl version of the record will also be made available for analog fans.

Dust…American…Dust was recorded, Mixed and Mastered at Wild Arctic Studios by Dean Baltulonis and Shawn Kimon in July 2008