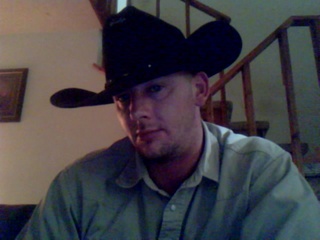 Hello, and Welcome
Richard is a 28 year old male, born in Topeka, Kansas in March of 1980. Richard lived a hard life growing up, with divorced parents, his mother fighting alcoholism which had a strong impact to his love for music, and at the same time adjusting to his fathers new marriage. Richard grew up around Cummings, Kansas. He later moved to Holton, Kansas where he met his current wife. He has 3 beautiful children.

Richard plays the acoustic guitar. he is self taught, and been playin' for about 6 years now. Richard has loved music all his life... All while growning up, he loved to sing. Its been a dream of his to play, and sing for a living, or at least part time.

How, do you think, does the internet (or mp3) change the music industry?
"I think the Internet helps the music industry a whole lot! I mean they have the chance to go and search for artists, songwriters, composers, ect... alot easier, rather than having them show up at the studio, and sorting them out there. It's much easier to do it by the internet."

Would you sign a record contract with a major label?
"YES of course, That has been my american dream for as long as I can remember!"

Your influences?
"I would have to say Steve Earle without a dought! I mean there are many others such as Randy Travis, Ricky Skaggs, George Strait, Vince Gill, George Jones, Willie Nelson, Waylon Jennings, Johnny Cash, Bill Monroe, Steve Warner, & I can't forget the Legends of all The Carter Family!"

Favorite spot?
"Well I haven't traveled much, but I would have to say, There isn't any place better than home!
p
A
n
E
F
Song Title by Artist Name