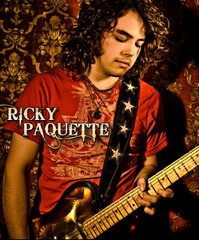 Ricky Paquette is electrifying with his guitar and his mellow hooks driven by a powerful voice.

Ricky has opened for such renound headliners as; CCR Revisited, Frank Marino and Mahogany Rush, Simple Plan, Buddy Guy & Johnny Winter. All before his 18th birthday.

Ricky is currently working on new material and plans to release a new album in the fall of 2009.