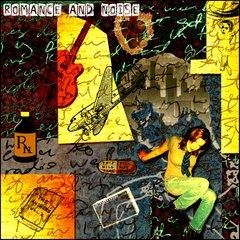 Romance and Noise creates an atmosphere of matchless beauty while maintaining a post-punk edge. Drawing inspiration from early shoegaze music as well as moods and textures of the Manchester Factory Records era, Romance and Noise fosters an elegant mix of both the dark and bright sides of sound.

Quote by Mark Kramer
“I barely made it thru the first minute of the first song before my heart began to pound. this is GREAT music. This stuff speaks directly to my heart.” Mark Kramer- Record Producer (Low, Galaxie...
Romance and Noise Press by
Reviews of Romance and Noise SongsThese are a set of soft pop tracks with an indie edge and an ambient feel all around. The music is well written and formatted. The guitar work is steady and loose...
Press Release by
Press Release, January 2007“Planetarium” out of this world Los Angeles, CA – “Planetarium” has done nothing but gain momentum since its release in December 2007. The song emulates the dichotomy of...
p
A
n
E
F
Song Title by Artist Name