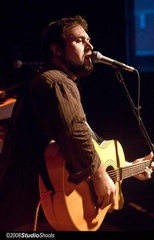 Ronny Criss, formerly from Chicago now based out of Nashville, TN, is a singer/songwriter whose most recent piece of work entitled Mercy Mechanics is an eclectic collection of studio and live performances that captures the essence of Ronny Criss in 2007. Produced by Chris Floyd, a fabulous singer songwriter in his own right, this album showcases the extreme talent of both individuals and gives a small taste of the beautiful music to come from this new found partnership. The album’s title represents the beginning of the coming project that is The Mercy Mechanics.

Ronny himself has been writing and performing since his late teens. Originally forming a band back in school at the University of Illinois, Ronny played with a solid group of friends who all came from different backgrounds to form Phineas Gage.

Upon graduation three members of the band moved to Chicago in the spring of 2002 and continued under the name Walkman Light. This incarnation of the band took on a more roots rock/60s & 70s rock vibe and abandoned their previous more college/acoustic rock sound. The last two years Ronnys music has been turning corners and been moving in a direction more closely related to his childhood roots.

Born in Forrest City, AR, Ronny spent the first five years of his life in Brinkley, a very rural country town 60 miles west of Memphis. At the age of five he moved to Chicago, but spent every summer there after until high school with his old man in Arkansas, many of those summers working directly with his father on a numerous farms near his hometown. This experience left a lasting impression on a very creative and insightful young child.

Before moving to Nashville, Ronny has played at many of Chicagos most popular music venues, places like The Elbo Room, Joes on Weed St., The Pontiac Café, Wise Fools Pub and even the VIP Lounge at the Tweeter Center in Tinley Park, IL for Concerts with Alan Jackson and Big N Rich and opened for Eric Heatherly as well. With the release of the new album and the beginning of new projects 2007 should be an even more exciting year than ones that proceeded it……Mercy!!