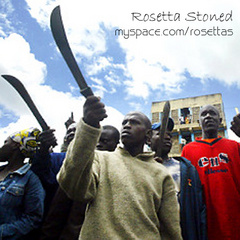 Washington, DC is arguably the most powerful city on the planet. That statement is reflected in the chaotic rush hours of the metropolis, the hordes of tourists, and the countless protests that exist in the president’s backyard. The city is such a fascinating, influential place to be. Yet many fear it because it held the title as the “Murder Capital of the World’ for years. Hip hop is one of the most effective, transformative mediums available and yet it’s also often associated with fear because some of its most significant artists had criminal lifestyles and messages. Rosetta Stoned was fertilized by both DC & hip hop and their music and lyrics are beautiful expressions of their lifelong internal struggles.

A crowd of fans pack a dimly lit club. They’re staring uncontrollably, simultaneously perplexed and mesmerized as the two men on stage seem to be inciting a riot. Drinks are spilled, the aggression builds, sweat drips, and heart rates increase. In the rear of the club, people at the bar comment on the insanity while noticing how eloquent and witty the songs are. For someone walking in on the performance, caution may be their first reaction. But for someone who’s seen a Rosetta Stoned live set, they know it’s a safe house for artistic expression. It’s like walking through a violent neighborhood with the safety of a third-person perspective. They’re terrorized stages with the likes of The Beatnuts, Boot Camp Clic, Raheem DeVaughn, DJ Drama, Percee P, Subtle, The Game Rebellion, Asheru, Kev Brown, Zion I & The Grouch, Glue, Qwel, Sol.ill.aquists of Sound, C-Rayz Walz, Josh Martinez & Sleep, Joe Beats, Time Machine, etc.

With hundreds of shows under their belts, the duo has experienced the passion of Californians, the ironic warmth of fans in Quebec , and the love that Europeans have for good music. The time has come for their debut project, I Bet You Can’t Pray When You’re Dead, to finally be released. The album is a scenic stroll through the psyche of two artists who are heavily influenced by the likes of Nietzsche, Voltaire, Gandhi, & Malcolm X. They’ve collaborated with many notable independent artists such as Yo Majesty (Dominoe Records), C-Rayz Walz of Monster Maker (Definitive Jux/Babygrande), Curse Ov Dialect (Mush Records), Crunc Tesla aka DJ Raedawn (Tigerbeat6), and more.