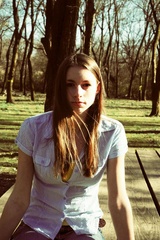 Rose Walker is a singer/songwriter with an unquestionably bright future. Her angelic voice delivered with youthful energy captures listeners with a personality that is truly authentic. “I don’t want my music to try to be something that it’s not,” she says. “I want my character to shine through on every song I write.”

Rose's songs have already attracted listeners from throughout the world. Her original compositions have drawn interest from radio and television, and online reviewers, one of whom says "(Rose) is on the cusp of singer/songwriter superstardom. She is a perfect hybrid of Tori Amos, Regina Spektor, Mindy Smith and Emmylou Harris, yet she is able to find a voice within herself that is wholly original and pure."

Recorded at the age of 16, her self-titled debut EP includes six songs praised by critics for their insight and honesty. One says, “(Her) voice soars high above mundane topics, touching on things that few sixteen year olds would even comprehend. Rose speaks of love, redemption, and loss. The songs have innocence but are not naïve, and at times, they actually rock.”

For example, in the pop-rock opener “Always for You,” Rose pounds out: “The rhythm of my heart, it reminds me of the day I first met you / It skipped a beat, you stole my breath, now every day I try to steal it back from you.” On the folksy “Come Back Home” she dreams: “I miss the color of your eyes looking into mine / I miss the shiver of your voice running down my spine.” In the delicate piano ballad "Voices," Rose recognizes the frustration of love declared too soon. “Stop wringing out my heart / And expecting words to flow / I love you’s not a start / When you can’t seem to let it go.” And in “Another Sometime” she identifies the aggravation of trying to force life into a relationship: “Through awkward conversation, through stubbornness and doubt / I think we’ll learn frustration, and learn to live without.” The indie hit spawned over 150 remix versions in Sony's popular Acid Planet remix contest.

The Atlanta resident seemed destined to write music, growing up with a father who released several independent albums of his own, an older brother who is a Nashville producer and another who is a virtuoso symphonic performer.

Rose continues to write, and is preparing songs for her second CD.

“Rose Walker’s six-track EP is piano-driven pop that is sure to ease a sad soul.” Big Smile Magazine

“Rose is an extraordinary talent in a far too ordinary music world.” Tripwire

Rose EP by Big Smile Magazine
Rose Walkers 6 track EP "Rose" is piano driven pop that is sure to ease a sad soul. Her voice is voicing her personality and soul into a happy and at times melancholy that echoes of early Eisley...
Rose EP by Collected Sounds
The music in general is poppy and up-tempo, especially Brand New Day, which I could see getting radio play on Top 40 type stations.She has a sweet, breathy pop voice that matches the material very...
Rose EP by The Tripwire
What would you expect a sixteen-year-old girl from Kennesaw, Georgia to create when it comes to music? A couple choices popped into my mind when I received a MySpace friend request from the young...