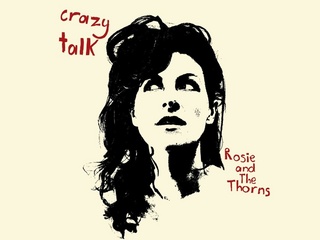 Rosie and The Thorns

Rosie Sutherland is getting ready to unleash her solo album on the world. Rosie was the only girl in cult surf band The Val Dusty Experiment. Now she fronts her own band of tight, experienced players and combines well-crafted pop tunes and a sweet vocal delivery in an honest and enjoyable style. She was selected as a 2008 Toyota Star Maker finalist gaining TV/radio/newspaper attention to her music. In August she is singing harmonies with The Brown Birds from Windy Hill at Byron's Splendour in the Grass.

Rosie's upcoming album sits somewhere a little outside Pop or Rock. Simple song structures and vocal harmonies allude to Folk and a little Country, with plenty of catchy choruses and solid rhythms for her accomplished band to drive along. Her music has evoked comparisons as diverse as Shelby Lynne, Cat Power, Fleetwood Mac and Tracy Chapman.

"In my music, I hope that I can describe feelings and experiences in a way that people can relate to, and help people work out what it is they should be encouraging and cherishing in themselves and those around them.
"I write songs about everyday things: sadness, problems with friends and lovers, children growing up"

Rosie has been writing for her solo album for over a year and playing regularly to NSW North Coast audiences. A strong band has formed during the development of the songs: Mark Wells (lead guitar), Geoff Dixon (bass), Dan Power (drums) and Princess Leah (backing vocals). They have played support for various acts (incl. Grant Walmsley's Agents of Peace, Louis Tillett, Dan England, Andrew Kidman, Crow Feather...) along the East Coast, from Sydney to Noosa Heads. They took their acoustic show to the 2008 Tamworth Country Music Festival playing gigs and invitation spots at major outdoor venues (see calendar).

A Demo EP is available now and includes 6 album demos plus a live track from the Hotel Great Northern, Byron Bay. With the upcoming self-release of her album, Rosie hopes to reach a wider audience playing at venues & festivals all over the country.